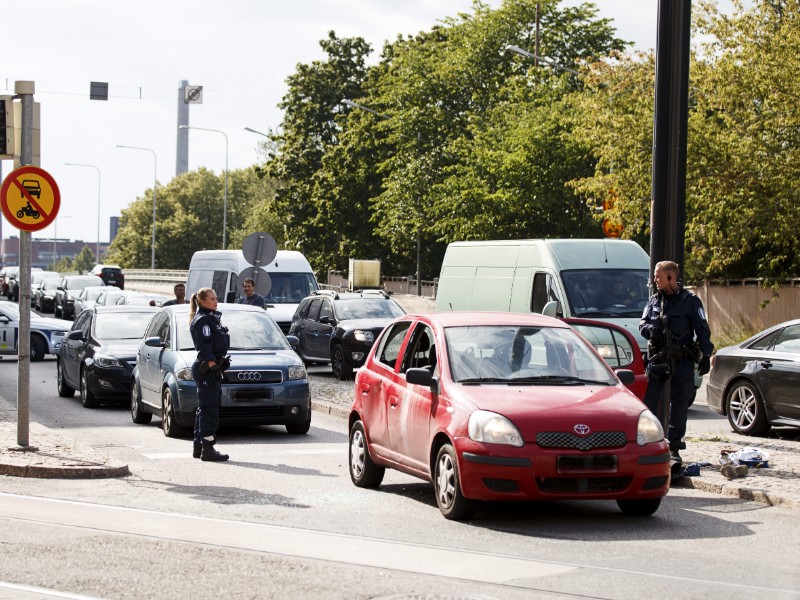 Police officers at the scene of a shooting that took place at a busy intersection in downtown Helsinki on Tuesday. The 32-year-old suspect was later brought into custody in Vantaa. (Roni Rekomaa – Lehtikuva)

A 32-YEAR-OLD MAN has been arrested on suspicion of three attempted murders following a shooting in broad daylight in Kamppi, Helsinki.

The Helsinki Police Department on Wednesday confirmed that the shooting took place at the intersection of Hietalahdenkatu and Porkkalankatu at approximately 4pm on Tuesday. The incident was preceded by a collision between a white van and a red compact car, according to Helsingin Sanomat.

The newspaper wrote yesterday that the suspect is believed to have crashed his van deliberately into the car, prompting one of the three people in the car to throw an object at the van and two of the people to step out of the car and approach the van.

The driver of the van stepped out with a firearm in his hand and discharged it several times, first, at the two fleeing men and, then, from close range at the third victim in the back seat of the red car.

Two of the three victims sustained injuries in the shooting and remain in hospital care, according to a press release from the Helsinki Police Department. All three victims were born in the 1990s. The gunman left the scene in his van but was brought into custody later the same day in Vantaa, reported Helsingin Sanomat.

Police have yet to interrogate the suspect.

The four parties involved in the incident are believed to have known each, revealed Jukka Larkio, the detective chief inspector in charge of the pre-trial investigation at the Helsinki Police Department. “We are dealing with a showdown between them,” he added in the press release.

Larkio also pointed out that the shooting took place in the city centre during the rush hour and, therefore, put many motorists and pedestrians in concrete danger.