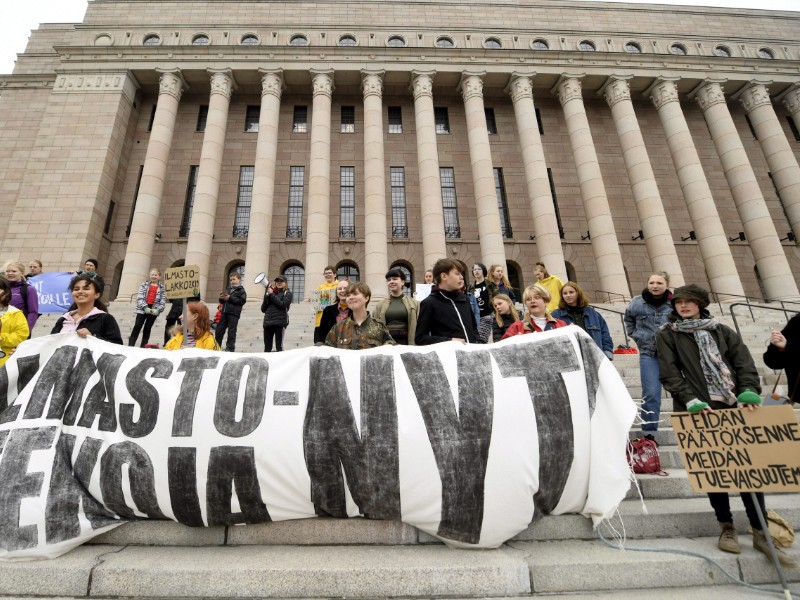 Finnish young people participated in a school strike for climate outside the Parliament House in Helsinki on 24 May 2019. (Vesa Moilanen – Lehtikuva)

THE FINNISH government must take action to ensure young people can have faith in the future, underlines Minister of the Interior Maria Ohisalo (Greens).

The Children and Youth Foundation on Friday reported that young people believe widely that tackling climate change will be a pre-requirement for well-being in Finland in 2050. Yet, only six per cent of the over 4,300 15–29-year-olds surveyed voiced their confidence that the effort to tackle the crisis will succeed.

“The message to decision makers is bewildering,” commented Ohisalo.

“Young people’s faith in the future, ability to cope and sense of security are being tested. Faith in the future and confidence in the society are one of the most important things we as people have to convey to future generations,” she underscored.

The survey, she highlighted, showed that young people increasingly lack confidence in the fairness of the society, with a third of the people surveyed viewing that their voices are not heard on key issues such as climate, education and working life.

“Decision-makers are responsible for showing young people that they have the right and opportunity to have faith in the future. The government programme commits us to achieving carbon neutrality in Finland by 2035. Tackling the climate crisis and investing in education provide us with an opportunity to show young people that we are looking after their future and their voices are heard in decision-making,” said Ohisalo.

Over two-thirds (67%) of young people also estimated that climate change will be one of the most impactful issues in Finland in 2050. Over a half (51%) of respondents also identified technology and almost a half (49%) growing immigration as main drivers of change in the country.

“It is no surprise in this light that climate anxiety in young people has become a social phenomenon recently,” the authors wrote.

Young Finns also estimated that decisions that encourage and compel people to change their lifestyles are acceptable to combat climate change: 56 per cent of respondents said it was likely and 64 per cent it was desirable that people’s choices are limited in an attempt to combat the crisis in the future.

“Only nine per cent were of the opinion that this is extremely undesirable.”

Only one-third of young people additionally estimated that they have the same future opportunities as their parents had growing up.