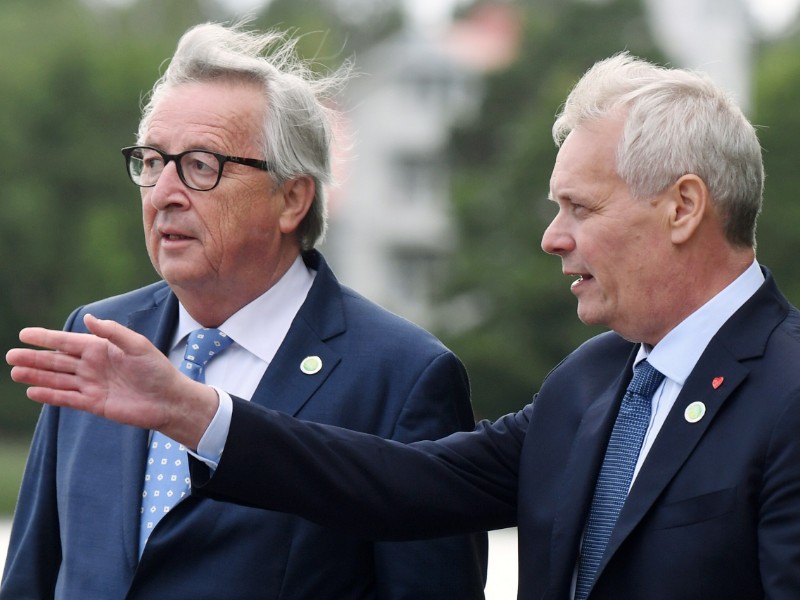 Jean-Claude Juncker (left), the outgoing president of the European Commission, and Antti Rinne, the Prime Minister of Finland, talked about the EU’s future course in Helsinki on 4–5 July 2019. (Jussi Nukari – Lehtikuva)

THE OUTGOING European Commission and the Finnish government have announced their intention to pursue close co-operation during Finland's newly commenced, six-month presidency of the Council of the European Union.

Prime Minister Antti Rinne (SDP) on Friday said the co-operation will focus particularly on sustainability, climate issues and achieving carbon-neutrality in the 28-country bloc by 2050.

The European Union, he underlined, must speak with a single voice in international climate negotiations and be unanimously supportive of the objective of becoming carbon neutral by the midway point of the century.

“In the 2020s, the EU will have the chance to fulfil the expectations of its citizens by taking the lead in addressing the major challenges faced by humanity. The crucial one is climate change, which is why the time for ‘yes, but’ policies for combating climate change is over. In Finland, in the EU and in the world,” he said in a press release issued in June.

Rinne and Jean-Claude Juncker, the outgoing president of the European Commission, also discussed the other priorities of the newly commenced presidency, including growth, security and rule of law, the multi-annual financial framework of the EU and the partnership between the EU and Africa.

“It is particularly important for the presidency and the commission to pull together at a time when we are defending the cornerstones of European integration: peace, security, stability, democracy and prosperity,” Rinne commented on Friday.

Finland will be the first holder of the presidency to incorporate the strategic, five-year agenda of the 28-country bloc into the work of the Council of the EU.

The Finnish presidency, which began on 1 July, will also seek to promote the competitiveness and social inclusiveness of the EU, according to a press release issued on Friday.

“To continue the deepening of the single market, we need holistic and comprehensive policies for ensuring that the single market, digitalisation and industrial policy are interlinked and reinforce each other,” stressed Timo Harakka (SDP), the Finnish Minister of Employment.

“Our task is to manage the transition to a sustainable European economy by having a proactive industrial policy, a consistent competition policy and an inclusive social policy,” he added.