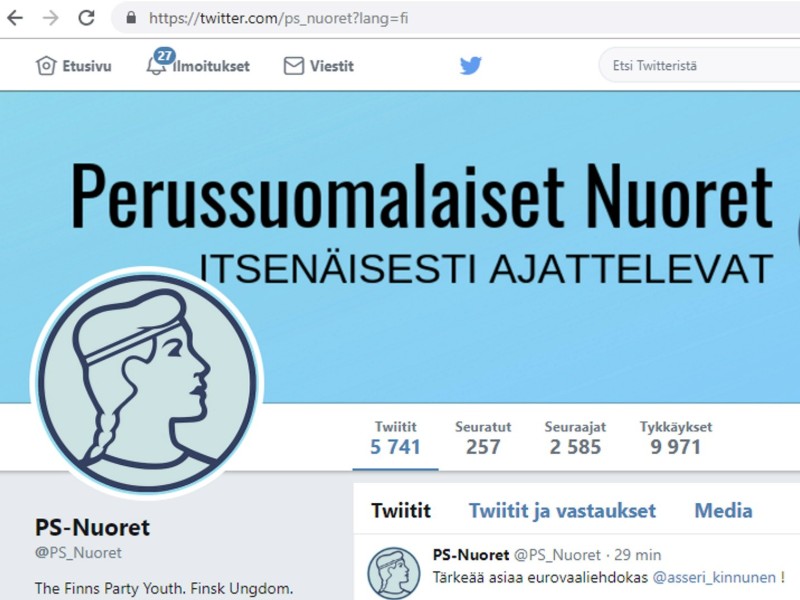 The Twitter profile of the Finns Party Youth on 24 May 2019. (Lehtikuva)

THE MINISTRY of Education and Culture has continued to chew over the fate of the state aid of the Finns Party Youth.

Uusi Suomi in May reported that officials at the ministry have concluded that it is possible to suspend and claw back state aid from the political youth organisation due to a series of controversial public statements made by its members.

The issue came to a head after a spokesperson for the youth organisation tweeted a photo of a black couple and newborn child in the run-up to the recent elections to the European Parliament. The tweet was accompanied by the text: “Vote for the Finns Party to make sure this won’t be what Finland’s future will look like.”

The Ministry of Education and Culture has granted a total of 115,000 euros in state aid to the youth organisation.

The Finns Party Youth submitted its statement to the ministry yesterday, highlighting that it has deleted and apologised for the tweet. It also argued that the tweet is not representative of its overall values and was posted accidentally by Toni Jalonen, a deputy chairperson of the Finns Party Youth.

Ombudsman for Equality Jukka Maarianvaara has similarly commented on the issue in a statement presented to the Ministry of Education and Culture.

The Finns Party Youth, he ruled, has acted in a way that is “serious and indicative of a fundamental lack of respect for dark-skinned people to the extent that it constitutes a violation of the human dignity of dark-skinned people based on their origin”.

“The ombudsman rules that the statement alone is possibly, and especially in conjunction with the comments attached to it, creating an environment that is hostile, degrading and humiliating for dark-skinned people,” stated Maarianvaara.

Sipola, for example, commented on the tweet by stating that dark-skinned people are not Europeans and that there are no dark-skinned Finns.

“The comments demonstrate that at least some of the Finns Party Youth’s leadership are of the opinion that the post was an attempt to spread an ethnonationalist message that consolidates the position of white people,” said Maarianvaara.

The Finns Party Youth, he concluded, has clearly violated the provisions of the youth act with its actions. The grounds for granting state aid to youth organisations are laid down in the youth act.