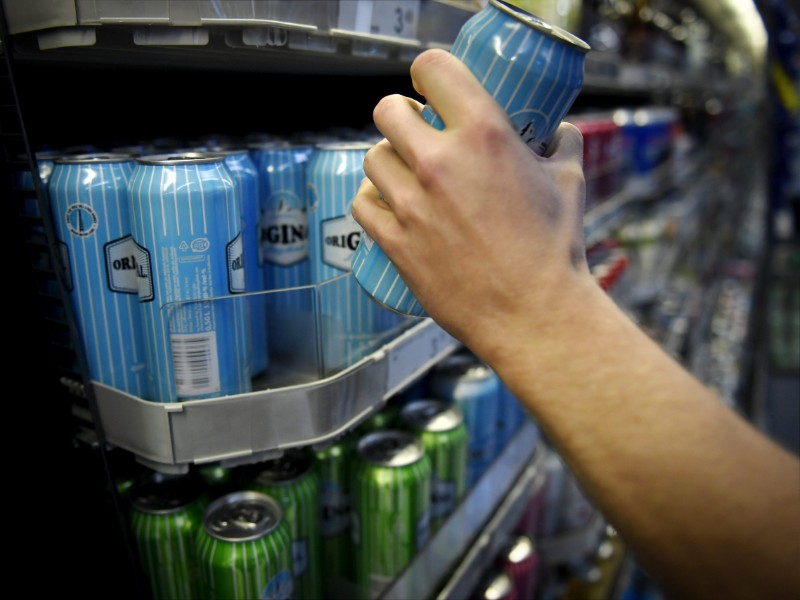 The average strength of alcoholic beverages sold at grocery shops has risen by 0.2 percentage points following the introduction of a new alcohol act in Finland, according to the National Institute for Health and Welfare (THL). (Antti Aimo-Koivisto – Lehtikuva)

NO MAJOR CHANGES have been observed in alcohol consumption following the adoption of a new alcohol act in Finland in April 2018.

The National Institute for Health and Welfare (THL) on Tuesday reported that the adoption of the act – which, for example, introduced stronger beverages to the shelves of grocery shops – appears to have brought about a slight increase in alcohol consumption, reversing its long-term downward trend.

“Pricing is probably the most significant reason for the smaller-than-estimated change,” commented Pia Mäkelä, a research professor at THL.

“Taloustutkimus and the Finnish Grocery Trade Association predicted that the prices of ciders and long drinks would fall by 40 per cent. Also THL estimated that the discount pricing of these products would make them competitively priced compared to low-cost beer. We fell well short of this at least in the first year, which is excellent news for public health,” she added.

In evaluating the effects of the legislative change, THL took into account a number of factors that have been shown to affect alcohol consumption, including summer weather, tax increases, and the storage and economic situation. It concluded that the legislative change alone has led to a 1.9 per cent rise in alcohol consumption, but added that the estimate is not statistically relevant as it falls within the range of statistical fluctuation.

The Finnish government was initially proposing that the effects of the legislative amendment be evaluated three years after its implementation.

“Even three years may sometimes be too short a time for an assessment: the sales of ciders and long drinks started in grocery shops in 1995, and at the time consumer behaviour did not change until five years after the law had come into effect. We modelled the changes now due to high demand for a short-term intermediate assessment of changes,” explained Mäkelä.

She underlined that final conclusions about the impact of the amendment cannot be drawn for several years.

THL on Tuesday reminded that alcohol consumption decreased by 20 per cent and alcohol-related deaths by 33 per cent in Finland between 2007 and 2017. Roughly 70 per cent of the drop in consumption, it said, can be attributed to pricing and economy-related changes, such as tax increases.