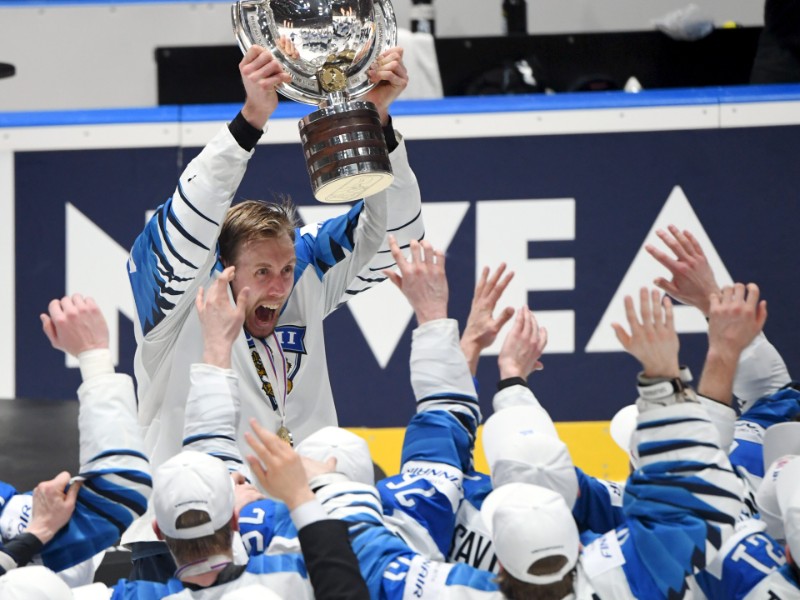 Captain Marko Anttila was surrounded by his team-mates as he hoisted the championship trophy after a 3–1 victory over Canada in the final of the 2019 IIHF Ice Hockey World Championship in Slovakia on Sunday, 26 May. (Jussi Nukari – Lehtikuva)

TEAM FINLAND delivered a real fairy-tale ending to their impressive campaign at the 2019 IIHF Ice Hockey World Championship in Slovakia, beating perennial pre-tournament favourites Canada 3–1 in the final on Sunday.

Finland fell down 0–1 in the first period but rallied with two goals from captain Marko Anttila – a first-period equaliser and third-period tiebreaker – to clinch their first gold since 2011.

The sounding of the final buzzer sent an estimated 10,000 people to celebrate the unlikely gold at Helsinki’s Market Place, according to a tweet from the Helsinki Police Department. A police spokesperson later said the championship party has gone on mostly without incident or injuries, although traffic had slowed down to a crawl in and around the square.

“Only the most tenacious fans are still keeping company to Havis Amanda,” a police spokesperson added at around 4am on Monday. “The event took place primarily without incident, except for a couple of disturbances. A few people were brought into custody.”

YLE reported this morning that people gathered to celebrate the championship in big numbers also in Tampere and Turku.