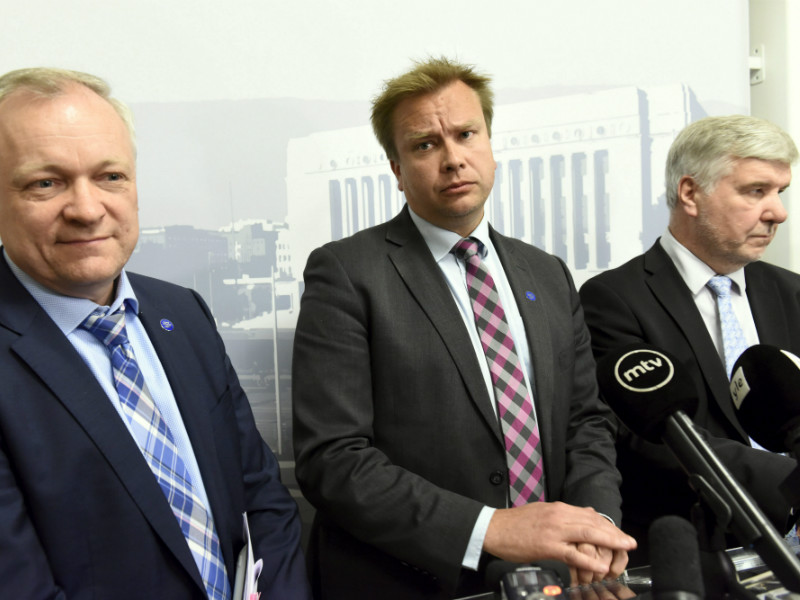 The group leaders of the three ruling parties, Kalle Jokinen (NCP), Antti Kaikkonen (Centre) and Toimi Kankaanniemi (PS), commented on the attempts to find an agreement on the reform of Finland’s alcohol laws in a news conference on 30 May, 2017.

The parliamentary groups of the three ruling parties will convene today to seek common ground on a bill to reform the alcohol legislation of Finland, after failing to agree on a compromise proposal presented by the Centre Party on Tuesday.

“We’ll see then if we can finally find an agreement on this difficult issue,” said Antti Kaikkonen, the chairperson of the Centre Parliamentary Group.

“We were and are still looking for a way to settle the unease among some representatives. For my part, I can tell – and this is already public knowledge – that some of Centre’s representatives are concerned about an increase in alcohol-related harm,” he said, adding that none of the ruling parties seems to stand completely united behind the draft bill agreed upon last year.

The Centre Party’s compromise proposal was identical with the draft bill with the exception of one detail, according to Helsingin Sanomat. The proposal would have defined the issue as a conscience vote, thus allowing legislators to cast their votes based on their own principles.

That detail proved a deterrent for the Finns Party.

The original agreement would, for example, allow grocery shops to retail beverages with an alcohol content not exceeding 5.5 per cent, instead of the current 4.7 per cent, regardless of their production method.

The Centre Party has recently grown increasingly wary of the bill's impact on public health.