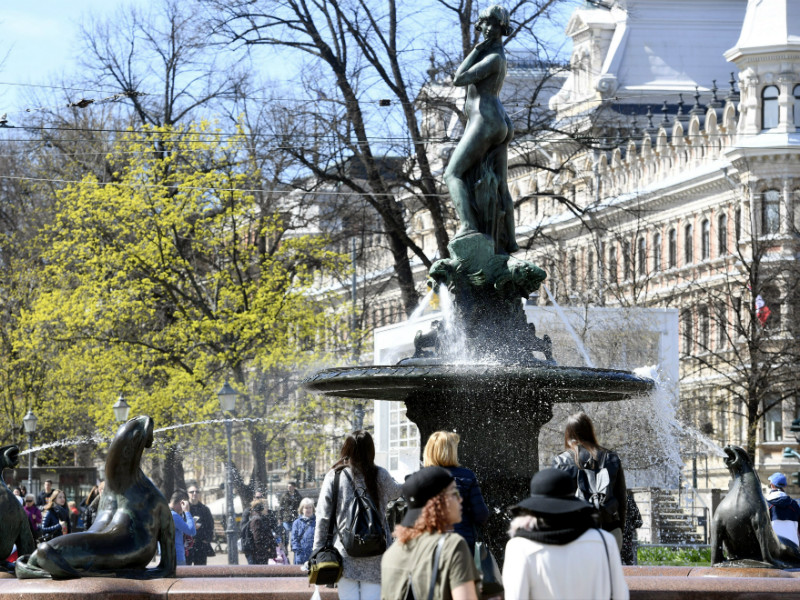 People enjoying the long-overdue warm weather at the Havis Amanda statue in downtown Helsinki on 14 May, 2017.

Cities are currently an obstacle to rather than a driver of economic growth in Finland, states Martti Hetemäki, the permanent state secretary at the Ministry of Finance.

Hetemäki argues in an online column that the labour markets of the four largest cities in the country have not functioned as efficiently as those of other regions in the 2000s, when measured in terms of employment and unemployment rate.

He also points out that the employment rate deteriorated only in Uusimaa, Pirkanmaa and Varsinais-Suomi in 2000–2016.

Osmo Soininvaara (Greens), a councillor for the City of Helsinki, believes more resources should be allocated to promoting the development of urban regions in Finland.

“I have tried to make the same argument as Hetemäki. The fact that economic growth is slower in Finland than in Sweden is because Finnish cities are not successful as Swedish ones. Economic growth in modern-day world is equivalent to the growth of cities,” he says.

“Our cities must look in the mirror to understand why we are not doing quite so well. But the [Swedish] state is also investing ten times as much in the infrastructure of Stockholm than the Finnish state is investing in Helsinki. Promoting the growth and success of cities is a key aspect of policy-making in Sweden, whereas in Finland the attitude is that it would be better if they did not grow,” adds Soininvaara.

He also reminds that it is only natural for the unemployment rate to be higher in urban than in rural regions.

“It makes sense for the unemployed to move from Kymenlaakso to Tampere. Even though it will raise the unemployment rate in Tampere, they will have a better chance of finding employment there than in Kuusankoski.”

Hetemäki argues that the difference also indicates that the labour markets have functioned less efficiently in Helsinki than in other Nordic capitals, as the other capitals have experienced rapid population growth, partly as a result of immigration, without witnessing an increase in the rate of unemployment.

“That is likely to explain the differences between the economic growth rates in the capitals,” he writes.

He considers it particularly regrettable that there seems to be a shortage of suitable applicants for the new jobs that are currently being created in Finland.

“The latest statistics indicate that the number of job openings continued to grow rapidly in January. The availability of labour is a major problem in many sectors, even though unemployment is high. […] It would be something of a bankruptcy of the economic policy, if the economic and employment recovery was thwarted because there are no employees to fill the openings.”