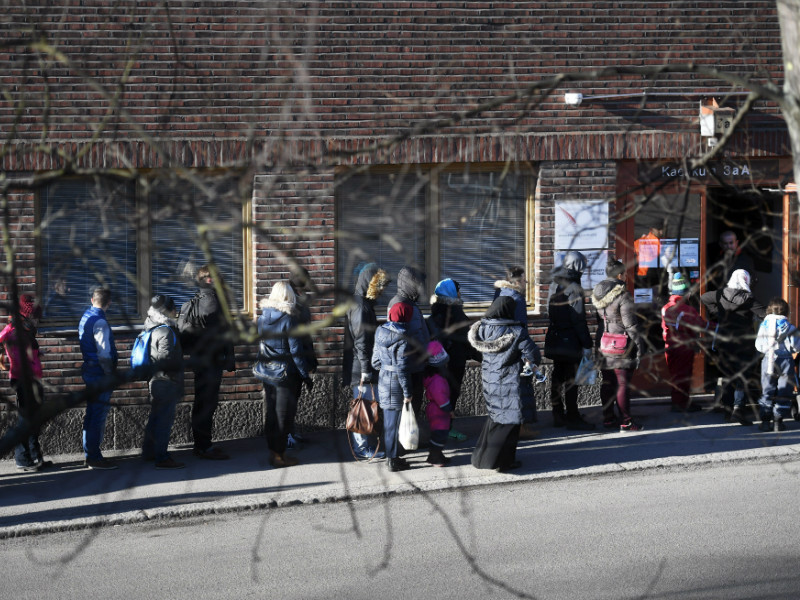 A line outside the head office of the Finnish Immigration Service (Migri) on 24 March, 2017. Competition for jobs, even low-paid ones, is fierce among asylum seekers.

Numerous asylum seekers and undocumented immigrants are being paid no more than a couple of euros an hour for cleaning shops, schools and activity centres, and cooking and washing dishes in restaurants in Finland, reports Helsingin Sanomat.

Greater Helsinki alone is believed to be home to hundreds of asylum seekers who are employed in the shadow economy.

One such employee, an Iraqi asylum seeker who has appealed the decision to deny him asylum in Finland, revealed to the newspaper that he has worked in a restaurant in Helsinki for more than six months for an hourly wage of 2.5 euros. He typically works six to seven days a week, often as much as 12 hours a day.

“For every job, there’s one hundred willing workers in the reception centre. Employers can find new workers at any time,” he said.

Such employees are extremely dependent on their employers and may even live at the workplace, according to Helsingin Sanomat. Researchers have warned that the exploitation of migrants and undocumented immigrants could contribute to the development of a permanent underground labour market in Finland.

Päivi Nerg, the state secretary at the Ministry of the Interior, has admitted that a share of unsuccessful asylum seekers are expected to seek to stay in the country illegally, thus possibly contributing to the growth of the shadow economy.

Helsingin Sanomat also calls attention to another similar case, that of four asylum seekers from Iraq.

The four men were recruited as part of a group of seven from the Evitskog Reception Centre in Kirkkonummi by a business owner based in Southern Finland in mid-2016. The men began their training periods in hopes of ultimately being offered paid jobs and, thus, being able to apply for employment-based residence permits.

Four of the seven asylum seekers were finally offered an employment contract in December, but their epmloyer continued to neglect to pay the 1,200-euro wage agreed upon in the contract. Helsingin Sanomat writes that in March, after repeated demands from both the employees and the reception centre staff, the employer paid three of the men 500–600 euros for work performed between July, 2016, and March, 2017.

A pre-trial investigation has been opened into the case. The business owner is tentatively suspected of extortionate work discrimination.