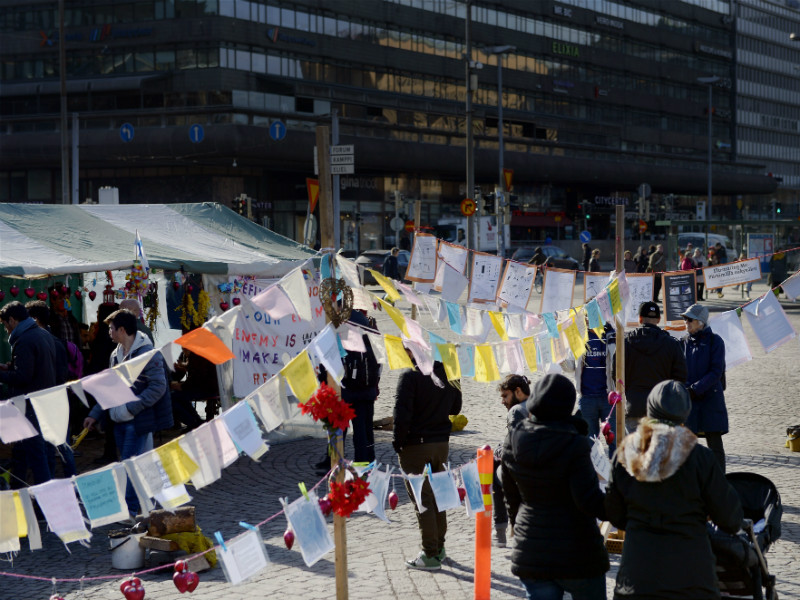 A protest camp set up by unsuccessful asylum seekers at Helsinki Station Square on 20 March, 2017.

Finland recorded a sharp decrease in the number of asylum applications filed at its borders between 2015 and 2016, according to the European Migration Network (EMN).

The EMN highlights in its annual report on migration and asylum that the number of individuals who applied for asylum in the country fell from 32,476 to 5,651, representing a year-on-year decrease of over 80 per cent.

Iraqis, Afghans and Syrians remained the largest groups of asylum applicants by nationality in Finland in 2016, with 1,247, 757 and 602 applicants respectively.

The unprecedented influx of asylum seekers witnessed one year earlier was reflected in statistics on asylum decisions. Last year, the Finnish Immigration Service (Migri) issued a total of 28,208 asylum decisions, granting 27 per cent and turning down 51 per cent of the applications.

The EMN also reports that a total of 39,317 foreign nationals received their first residence permit or registered as residents in Finland in 2016. The most common grounds for granting residence were family ties (21%), international protection (18%), study (16%) and employment (15%), according to the report.

In 2015, the number of foreign nationals who received a residence permit or registered as residents in Finland stood at 33,568.