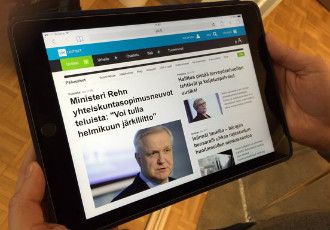 The Federation of the Finnish Media Industry (VKL) is calling for notable changes in the online operations of YLE, its chief executive officer, Jukka Viitasaari, reveals in an interview with Uusi Suomi.

VKL has according to him proposed to the parliamentary committee responsible for determining the funding and responsibilities of YLE that the national broadcasting company discontinue the production of news intended solely for online distribution.

This, along with the other responsibilities of YLE, should be set forth in the legislation, according to VKL.

“YLE would produce news for radio and television and could also publish the news online,” Viitasaari explains. “YLE is currently competing with private media companies by essentially publishing an online newspaper.”

He recognises that the proposed changes would probably encourage private media companies to introduce pay-walls but estimates that pay-walls are unlikely to become a widespread feature of the media industry.

He admits that establishing a consensus among the parliamentary committee is likely to prove difficult. Anne Berner (Centre), however, is more appreciative of the hardships of private media companies than her predecessors as the Minister of Transport and Communications, gauges Viitasaari.

Viitasaari also urges the parliamentary committee to intervene in the way the national broadcasting company operates. “YLE is the only listed company I'm aware of that devises its budget before devising its strategy and action plan. Listed companies typically operate the other way around. That's an odd way of thinking,” he states.

“YLE is allowed to run wild with its half-a-billion euro budget.”

Another market bully with a public service obligation is Posti, says Viitasaari. “[Posti] can one-sidedly dictate prices and has introduced dramatic price hikes in recent years with a simple notification. Its notable price hikes have been hard especially on regional newspapers,” he explains.