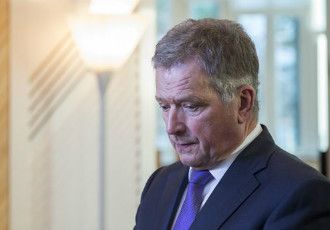 President Sauli Niinistö called attention to what is “seemingly an isolated incident” that may reflect the refugee situation on the border between Finland and Russia while meeting with members of the media on Tuesday.

“I'm talking about the Indian man who reportedly froze to death close to the border,” he began.

Niinistö said he was particularly confused by the fact that news reports emanating from Russia indicated that the unfortunate incident took place some 70 kilometres from the border. “What's confusing about it is that the reports suggested the man had not been granted a permission to proceed. They're certainly not referring to a Finnish permission – 70 kilometres deep into Russia,” he said.

“What's the permit system in question is naturally a bit puzzling.”

“On the other hand, the reports also suggested the man did not receive help because he hadn't hired an escort for himself. These details are from Russian newspapers. If they are true, they raise the question if there is a system of permits and hired escorts. If they are indeed true, they raise some serious thoughts,” said Niinistö.

News outlets have also speculated on the possibility that the flow of migrants across the border is systematic and that Russia has a geopolitical incentive to orchestrate the migration of refugees and other foreigners from its soil to Europe. Niinistö refrained from commenting on such reports on Tuesday.

The President acknowledged that from the viewpoint of Finland the main emphasis of the phenomenon has shifted to the eastern border with Russia. The people who have crossed the border to seek asylum in Finland already represent 30 different nationalities.

“We're clearly no longer talking only about migration caused by the unrest in Iraq and Syria,” Niinistö concluded.

Finnish authorities and policy-makers are according to him monitoring the situation on the border closely.