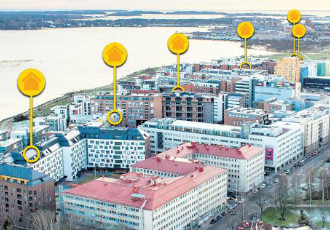 Almost five thousand high-income households in Helsinki profit thousands of euros a year from the low rents charged by the City of Helsinki.

The households pay considerably lower rents than tenants in the neighbouring, non-subsidised rental units owned by real estate investors: the difference between the rents is an average of six euros per square metre, but it can be greater in neighbourhoods located at the heart of the city.

A single household can consequently save up to 10,000 euros in annual housing costs in the most sought-after neighbourhoods, such as Arabianranta and Katajanokka.

The adult residents of such rental units have reported average net earnings of 40,000 euros a year and fall within the top 20 per cent of earners in the country. The low housing costs also benefit their family members.

The authors of the recent study, Essi Eerola of the Bank of Finland and Tuukka Saarimaa of the Government Institute for Economic Research (VATT), calculate that the City of Helsinki is effectively “donating” a total of 40 million euros a year to high-income households.

“The savings in rent costs represent lost revenues from the viewpoint of taxpayers, although they are not reported as municipal expenses in the same way that housing allowances are reported as state expenses,” the researchers say.

The researchers examined income and rent data gathered in 2011 by postal codes. The data do not include the most expensive neighbourhoods, such as Jätkäsaari and Kalasatama.

The City of Helsinki has regularly cited the policy of social mixing as justification for granting the rent benefits. Municipal decision-makers have been willing to prevent the concentration of households in certain neighbourhoods and rental buildings.

Saarimaa believes re-directing the funds to schools in lower-income neighbourhoods would be a more effective alternative. “Education is what has been proven to be the most helpful in the long run,” he reminds.