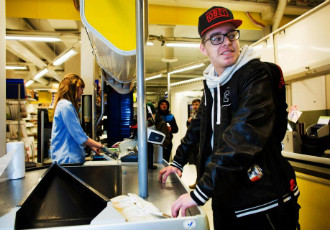 What would a 15-year-old boy do in a grocery shop in the middle of the night?

“Buy energy drinks,” replies Kim Vornanen, a resident of Mellunmäki, Helsinki, while buying vanilla-filled buns, rice pasties and cinnamon rolls with his girlfriend at an S-market in downtown Helsinki.

The Finnish Parliament approved on Tuesday a proposal to lift all restrictions on the opening hours of shops, effectively granting retailers and hairdressers the right to keep their doors open to customers for up to 24 hours a day.

S Group responded to the decision immediately by publishing a list of the new, longer opening hours of hundreds of shops: the grocery chain operator will extend the opening hours of twelve Prisma hypermarkets until 11pm and introduce around-the-clock opening hours at two S-markets in the capital region.

The customers interviewed by Helsingin Sanomat at one of the S-markets in question expressed their excitement with the prospect of longer opening hours.

Taloustutkimus surveyed the views of consumers on the matter more scientifically earlier this autumn. It found in a survey commissioned by Kaleva that two-thirds of the public are in favour of lifting the restrictions on shop opening hours, tells Marko Perälahti, a research director at the market research firm.

A total of 145 Members of the Parliament voted in favour of the proposal on Tuesday. Even most representatives of the Social Democratic Party expressed their support for the proposal, regardless of the fact that retail sector employees have been widely considered the main opponents of the proposal.

“I expect retailers to shoulder their responsibility this time and offer the additional hours to existing staff members,” Ann Selin, the president at Service Unions United (PAM), says in a press release.

Another major grocery chain operator, Kesko, announced that it will weigh up the need to expand opening hours on a shop-by-shop basis. “The differences in when consumers need access to the shops can be considerable even within municipalities. We won't start dictating in Helsinki when K-stores in Lapland should be open,” explained Jorma Rauhala, the head of grocery trade at Kesko.

Lidl will adopt a similar approach. The German operator of discount supermarkets will first introduce longer opening hours at a handful of shops in various parts of the country. “This has to correlate with genuine needs and revenue trends. Longer opening hours shouldn't create pressure to raise prices,” said Lauri Sipponen, the chief executive at Lidl Finland.

Both Kesko and Lidl are prepared to adjust the opening hours of their grocery shops as soon as the revisions take effect. The legislative change is expected to receive the requisite approvals at the turn of the year or, at the latest, by the beginning of February.

The retailers also declined to speculate on how many of their shops are likely to introduce extended opening hours.

Stockmann has similarly yet to make up its mind regarding the matter. Kristina Inkiläinen, a department store director at the cash-strapped retailer, comments according to a member of the communications division that “no decisions have yet been made, but some adjustments are to be expected”.

The proprietors of smaller grocery shops in Helsinki doubt the legislative revision will change their lives dramatically: the Regional Organisation of Enterprises in Helsinki found in a survey conducted in November that nearly half of retailers expect the annulment of opening hour regulations to have no impact whatsoever on them.

The introduction of extended opening hours at larger supermarkets could, however, be a bitter blow for some smaller retailers.

“It'll probably have an effect on sales: the revenues will decrease,” reminded Ralf Holmlund, the chief executive at Suomen Lähikauppa.

Holmlund also estimated that consumption will not grow but will simply be re-distributed as a result of the decision. If consumers prefer hypermarkets over corner shops also on holidays, the decision will probably dent the sales of smaller retailers.

HOK-Elanto, the largest co-operative retailer in Finland, similarly doubts the extension of open hours will bring about a sudden rush of customers. “The change will happen over months, not minutes. The opening hours will probably prove popular next summer, when it's light, there are all kind of events and people are on the move,” explained Veli-Matti Liimatainen, the deputy managing director at HOK-Elanto.

He estimated, based on the experiences of HOK-Elanto with six Alepa corner shops that are open around the clock, that there will no shortage of employees for the overnight shifts. The co-operative retailer will evaluate the outcomes of its experiment with longer opening hours on the basis of customer flows.

“We definitely won't keep all of our shops open 24/7,” Liimatainen said.

The customers interviewed by Helsingin Sanomat on Tuesday voiced their hopes that opening hours would be extended not only in central Helsinki, but also in their own neighbourhoods. Vornanen, for example, has a long moped ride from Mellunmäki to central Helsinki and an even longer one to the other around-the-clock S-market in Pohjois-Tapiola.

“Our corner shop closes at 6pm on Saturdays,” said Iida Söderlund, a resident of Puistola. “We should have something else there besides an R-Kioski.”