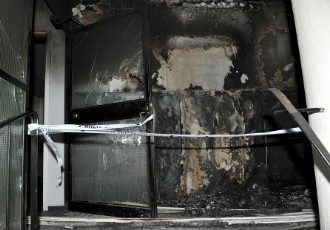 A building designated as an accommodation facility for asylum seekers was lit on fire in Rauma in the wee hours of Friday, investigators at the South-western Finland Police Department have ascertained.

The fire broke out in the staircase of the building but was subdued by the responding fire-fighters before any of the residents suffered serious injuries, according to the investigators. A few of the residents were nevertheless taken to a hospital with burns.

The first asylum seekers were scheduled to move into the building next year. The building is currently inhabited by people who have arrived in Finland from elsewhere in the European Union, some of whom are employed at the construction site of the Olkiluoto Nuclear Power Plant.

The residents will be brought in for questioning in the days to come. “We've yet to make any arrests in connection with the incident. We've also yet to interview the residents. Most of the people living in the building are foreigners so it's taken us a while to find a common language,” Marko Peltonen, the officer in charge of the investigation, said on Friday.

He refused to reveal whether the investigators have identified any suspects or determined a possible motive for the act. He did reveal, however, that the fire is investigated as aggravated criminal mischief because it threatened the life and well-being of dozens of people.

The incident is the latest in a series of offences against facilities housing or providing education to asylum seekers in Finland.

Bricks and petrol bombs have been thrown at reception centres. Investigators are also looking into several attempts – some successful, others not – to burn down buildings associated with the influx of asylum seekers.

The penalties handed down for attempted offences are generally more lenient. Attempted criminal mischief is nevertheless punishable under the legislation, and a racist motive can be regarded as aggravating circumstances in sentencing.

Data published by Statistics Finland indicate that the penalties imposed for instances of attempted criminal mischief in 2011–2014 by courts of first and second instance ranged from suspended prison terms of a couple of months to prison terms of nearly one year. The penalties for aggravated forms of the offence, meanwhile, were without exception long prison terms.

At least one of the allegedly racially motivated acts that have taken place over the past couple of months has already been brought before a court of first instance. On 20 November, a 50-year-old man was sentenced to one year in prison for attempted criminal mischief for hurling a petrol bomb at an emergency accommodation facility in Keltakangas, Kouvola, in September.

The prosecutor demanded that the man be sentenced to a minimum of three years in prison, but the court ruled that his actions did not meet the elements of the aggravated form of the offence. The court did, on the other hand, determine that the act was racially motivated and regarded it as aggravating circumstances in sentencing.

The case is expected to be brought before the Eastern Finland Court of Appeal as the prosecutor has reportedly declared their dissatisfaction with the ruling. The deadline for formal appeals has been set to 21 December.