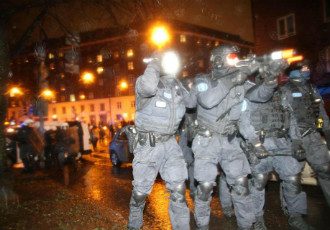 A torch-lit march organised by the nationalist movement 612.fi took off from Töölö Square in Helsinki on the evening of Independence Day under strict police supervision, as did its counter-demonstration Vapaus Pelissä (en. Freedom at Stake).

The people participating in the counter-demonstration were encircled by law enforcement officers close to Hesperia Park, but the demonstrators split into smaller groups and managed to disrupt the march.

“To the people who have gathered in Hesperia Park: you will not be allowed to proceed towards Runeberginkatu to disrupt the protest march. Police officers are prepared to use force,” a police spokesperson declared to the counter-protesters.

Toni Uusikivi, a detective chief inspector at the Helsinki Police Department, reveals that the protesters were blocked off in Hesperia Park in an attempt to prevent them from clashing with the marching nationalists. “It's our duty to protect the people participating in the protest march because they've given the appropriate notice of the march,” he explains.

Both riot and mounted police officers were on duty on the evening of 6 December.

An estimated 200-300 opponents of immigration participated in the torch-lit march that started off towards the Hietaniemi cemetery roughly half-an-hour behind schedule, at approximately 7pm, amid the torrid rain. Roughly 100 people gathered elsewhere to participate in the counter-demonstration.

The nationalist protesters let out three cheers of “hurrah” for veterans and bellowed “Finland first” before setting off. The first part of the march proceeded without incident.

“I'm here because of today's situation. We're facing a wave of economic refugees. You're willingly relinquishing the independence of Finland,” a young man participating in the protest march commented to Kalle Koponen of Helsingin Sanomat.

A handful of people were taken into custody in the midst of the clash.

The counter-demonstrators also let off fireworks in the streets of Helsinki but inflicted no injuries on bystanders, according to law enforcement officers.

The Helsinki Police Department announced later on Sunday that roughly 30–40 people were taken into custody in connection with the demonstrations. Authorities had announced already in advance that they would have a low tolerance for any disturbances on the evening of Independence Day. A tweet published by a police spokesperson indicated, for example, that appearing in public in disguise was illegal, but the tweet was later amended.

The Helsinki Police Department received official assistance from other police departments for the emergency and supervisory duties on Sunday.