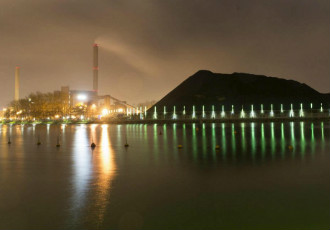 The Helsinki City Council took on Wednesday a decision on the future of the energy production of Helen Ltd.

Helsinki will carry out what has been described as a distributed development model out of the three alternatives proposed by the city-owned energy producer: It will shut down the coal-fired power plant in Hanasaari and build a biomass heating plant in Vuosaari. The oil-fired heating plant in Salmisaari, in turn, will be replaced by a pellet-fired one in 2017.

A silent demonstration was held outside the session hall before the meeting to urge the city to take more resolute action to phase out the use of fossil fuels. “Helsinki will still be left with two coal-fired power plants in Salmisaari and two natural gas-fired plants in Vuosaari,” reminded Hanna Hakko, a campaign co-ordinator at Friends of the Earth.

“Helsinki is the only capital in the Nordics that hasn't adopted a resolution to transition completely to renewable forms of energy,” said Laura Meller, a campaigner at Greenpeace.

The City Council also approved the budget proposal for next year.

An odd episode was witnessed as the councillors debated a counter-proposal submitted by Paavo Arhinmäki (Left Alliance). Arhinmäki had demanded that the budget proposal include a written guarantee that the right to daycare services will not be limited and group sizes in daycare will be maintained at their current levels.

His proposal was turned down overwhelmingly, by a 70–13 vote, as all council groups with more than two members – with the exception of the Left Alliance – had already agreed on the matter.