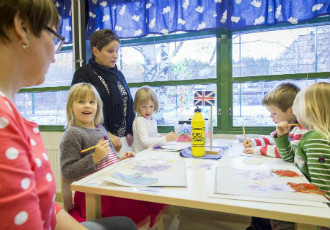 Participation in early-childhood education among children aged six and younger is far less common in Finland than in other developed countries.

In France, for example, all three-year-old children are enrolled in early-childhood education, whereas the enrolment rate for their peers in Finland is no more than 70 per cent, finds an international education survey conducted by the Organisation for Economic Co-operation and Development (OECD).

The Finnish Parliament is currently mulling over revising the Act on Children's Day Care to restrict the right to early-childhood education to 20 hours per week for children whose parents are not in full-time education or employment.

“Common sense tells us the reform certainly won't increase participation in early-childhood education in relation to other countries,” says Kristiina Volmari, the head of international relations at the Finnish National Board of Education.

Restricting the right to early-childhood education goes against the very spirit of the legislation, states Hanna Saarinen, the person in charge of Daycare Unit Suikkilanseutu in Turku. “The premise of the legislation is that the child comes first and every child is offered equal opportunities for lifelong learning. The changes are in stark contrast of a relatively new law,” she argues.

“Some are of the opinion that home is the best place for children, but studies suggest quite the contrary. Early-childhood education is crucial for the later development of children and evens out differences between households,” adds Volmari.

She also points out that several countries are gearing up to invest considerably in early-childhood education – a fact that can have an impact on future PISA results.

“Finnish families are free to choose. The survey also doesn't recognise open early-childhood care services as a form of early-childhood education. Age groups in Finland don't typically get together until nursery school.”

The high costs are partly attributable to group sizes.

The group sizes are set to grow also in Finland: a legislative change scheduled for implementation next autumn stipulates that the groups must have one instructor for every eight children, instead of the current seven. The group size will grow from 21 to 24 as the legislation also prescribes that a minimum of three adults must be assigned to each group.

The groups may even become larger as more and more children are expected to participate in early-childhood education on a part-time basis. The minimum staff requirement for a group of such children is one instructor for every 13 children.

Groups of under three-year-old children, on the other hand, would continue to have one instructor for every four children.

Group sizes can also be determined at the local level. The City of Turku, for example, remains undecided on the matter as some of its councillors have urged it to maintain the current group sizes.

Children in Daycare Unit Suikkilanseutu are divided into groups of 12–21. Saarinen and kindergarten teacher Tiina Paavilainen remind that the unique needs of each child have to be met on a day-to-day basis.

“No one is naturally hoping that the group sizes will grow because you'd be left with less time to spend per child. The staff are already busy enough when one child is in the bathroom and another is missing their mother, while you have to provide early-childhood care to the remaining five,” Paavilainen points out.

Finland is no longer leading the way in the share of young adults with higher education qualifications as the share has dropped below the OECD average of 41 per cent.

The country came in 14th in a comparison of education levels among the 25–34-year-old population, with South Korea, Canada and Norway all boasting a considerably higher scores. The increase in higher education attainment, however, has already halted in Germany and the United States.

Tomi Halonen, an education counsellor at the Ministry of Education, says Finland has simply failed to keep step with a number of other developed countries. He also points out that the statistics are slightly more favourable to Finland in older age groups, which is also an indication of longer graduation times.

Various measures to shorten graduation times have already been adopted in Finland.

An examination of the entire working-age population, people aged 25–64, shows that higher education attainment in Finland remained above the OECD average of 41 per cent in 2014.

Nearly half of the people with higher education qualifications in Canada and South Korea have only completed a bachelor-level or equivalent degree, whereas in Finland the corresponding share is 27 per cent. In Finland, this group of people includes those with a bachelor's degree, a polytechnic degree or a post-secondary vocational degree, which was abolished in the early 2000s.

The rule of thumb in Finland is to complete a master's degree, although one of the objectives laid out in the government programme is to encourage more students to settle for an undergraduate degree.