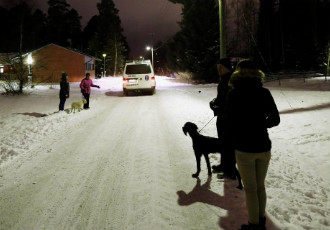 Prime Minister Juha Sipilä (Centre) sat down with his Minister of the Interior, Petteri Orpo (NCP), and Minister of Justice, Jari Lindström (PS), on Tuesday in the wake of a suspected rape in Kempele.

Two young men, aged 15 and 17, have been brought into custody in connection with the alleged rape of a 14-year-old girl in the municipality some ten kilometres south of Oulu on Monday. Local law enforcement officers have revealed that both of the suspects are of foreign origin but have yet to confirm whether or not they are asylum seekers.

“We didn't meet because of the incident in Kempele but to review the disturbances that have taken place in and around reception centres. They have increased, according to police officers,” Sipilä told Helsingin Sanomat on his way out of the meeting.

Scores of people passed by the reception centre in Kempele on Tuesday. Some went by in their cars, others walking their dogs as police officers patrolled the area in police vans. “Angry people have been around since this morning. There's every reason for the lookouts,” Markku Tapio, a local resident, said while driving by the reception centre.

The former supportive housing facility opened its doors to 16–20-year-old asylum seekers roughly a week ago.

“It didn't take long until the commotion started. People started becoming afraid and watching over their shoulder. Many are afraid to let their girls outside, even though we just got the snow to play in,” bemoaned Tapio.

Nearby residents Kiia and Janne voiced their outrage over the incident. They refused to reveal their surnames out of concerns that they will be branded in the aftermath of the incident. “There used to be no reason to be afraid here. Now I'm afraid to go outside alone. I need to have a friend with me all the time,” Kiia said.

“The worst that could happen happened. This is really what we've been expecting after the decision to accommodate 16–20-year-olds here,” added Janne.

Sipilä pointed out that disturbances have occurred between asylum seekers inside reception centres as well as due to the native population outside of them. “We were presented with a report by the Police Commissioner and Minister of the Interior about the measures already taken and whether there's something more we could do. Quite a lot has already been done to prevent disturbances at reception centres,” he said.

Law enforcement officers, he added, have already stepped up their patrolling and other activities around reception centres.

Seppo Kolehmainen, the National Police Commissioner, confirmed that authorities have received reports of disturbances, physical altercations, thefts but also of inappropriate treatment of women from in and around reception centres.

Sipilä revealed that one of the questions on the agenda of yesterday's emergency meeting was whether or not it would be possible to speed up the deportation of asylum seekers convicted of serious crimes. “A conviction of a serious offence will obviously influence the asylum decision. We concluded that our laws are pretty much up-to-date with respect to these issues,” he said.

Sipilä became the focus of worldwide media attention earlier this autumn for offering his personal home in Kempele to asylum seekers.

The Oulu Police Department announced on Tuesday that the suspected rape took place on Asematie late on Monday. The victim of the incident remains in shock and has yet been able to provide her account of the course of events. The suspects, in turn, have yet to be interrogated due to a shortage of qualified interpreters, according to the investigators.