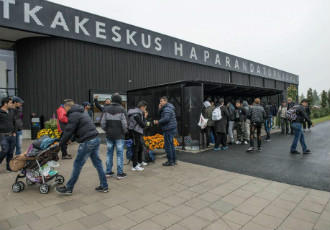 Finnish authorities maintain the readiness to house asylum seekers in tents instead of accommodation facilities regardless of the fact that the number of asylum seekers arriving in the country has dropped considerably following a decision by Sweden to step up its border control efforts.

The number of asylum applications filed in Finland dropped last week to its lowest level since late August, to 837.

Roughly 2,000 asylum seekers arrived in the country in both of the two preceding weeks, while the number of weekly arrivals peaked at approximately 4,000 earlier this autumn. “The number of applicants is now clearly different from what it was before,” confirms Esko Repo, the head of asylum affairs at the Finnish Immigration Service (Migri).

Repo considers it self-evident that the decline in asylum applications is a result of the border checks introduced by Sweden a fortnight ago. Sweden launched the temporary border checks of asylum seekers in response to a record influx of asylum applicants on 11 November and decided last week to continue the checks until 11 December.

Authorities have according to Migri maintained the readiness to house future arrivals in heated tents even though the accommodation facilities have thus far proven sufficient. The Finnish Red Cross (SPR), which is responsible for organising the tented accommodation, will erect tents at the yards of reception centres.

Migri reveals that the first tents will be erected in Kauhava, Keuruu and Meltola. Each of the reception centres will be supplemented with a few dozen tents with a capacity of 20.

Migri also reveals that it will encourage the use of shipping containers as accommodation units for asylum seekers. Containers are already in such use at the Oulu Reception Centre and in test use at Luona Oy in Espoo.

Finland has established approximately one hundred new reception units since the beginning of the year.

Earlier this autumn, a vast majority of asylum seekers arrived in the country by crossing the northern border with Sweden. The inflow of applicants, however, is currently distributed more evenly across various border-crossing points. “The number of asylum seekers entering Finland from the north has dropped notably. 90 per cent of asylum seekers have used that route in the course of the autumn,” Repo says.

A total of 29,892 people had applied for asylum in Finland by 24 November. Repo expects the number to rise above 30,000 by Wednesday or Thursday.

Estimates drawn up by the Ministry of the Interior indicate that the number is projected to creep up to 30,000–35,000 by the end of the year. Its estimate is likely to prove accurate barring another surge in the number of applications later this year.