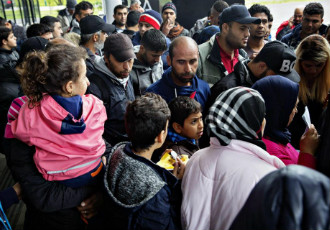 The Government of Finland has had to earmark additional funds to cover the costs arising from immigration and asylum applications.

The Government decided on Thursday to supplement its budget draft for next year by allocating nearly half a billion euros, or 452 million euros, specifically to cope with the sharp increase in the number of asylum seekers arriving in Finland.

Reception centres and the authorities responsible for processing asylum applications – law enforcement and judicial authorities – for example are in urgent need of monetary support.

A total of 30,000 asylum seekers are expected to arrive in Finland in 2015, according to latest official estimates. The Government expects to grant a residence permit to 35 per cent of the 15,000 asylum seekers who are projected to cross the border into the country in 2016.

The Government has already had to allocate nearly 600 million euros more funds for costs stemming from immigrants and asylum seekers than it expected last spring. The number of asylum seekers alone, for example, is set to exceed the six-month old projections ten-fold by the end of the year.

The contributions of Finland towards the budget of the European Union will, on the other hand, decrease by 180 million euros from the previous years as a result of changes introduced to national accounting practices, according to the supplementary budget draft.

The Government submitted its supplementary budget draft for parliamentary consideration on Thursday.