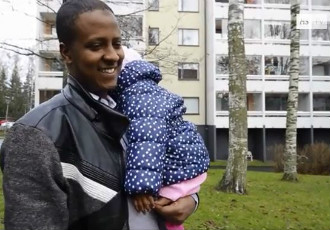 The Finnish Government is intent on restricting the possibilities of successful asylum seekers to bring their families to Finland.

An agreement on the introduction of more rigorous criteria on family reunifications was reached already in the coalition negotiations, but the ballooning number of asylum seekers has added a new sense of urgency to the plans.

“We can and must tighten [the criteria] for family reunifications. So far, it's been fairly easy for those who've won asylum to reunite with their families,” says Jorma Vuorio, the head of migration affairs at the Ministry of the Interior.

Officials at the Ministry of the Interior began drawing up the new criteria on grounds of a directive of the European Union on family reunifications that has yet to be fully implemented in Finland. The directive allows member states to apply more rigorous criteria to family reunification applicants who have not been granted refugee status.

Policy-makers will be consulted for the preparatory work this week. The objective is to submit the bill for comments at the beginning of next spring and to present it to the Parliament for consideration by next summer.

“Finland shouldn't at least have looser criteria than other EU countries,” states Timo Soini (PS), the Minister for Foreign Affairs.

The new criteria would be applied to people under so-called subsidiary protection in Finland. Roughly half of such people received a positive decision on their family reunification application last year.

Subsidiary protection can be afforded on grounds of individual persecution, for example.

The measures under consideration also include the adoption of stiffer requirements on both the sponsors of family reunifications and the family members moving to Finland. Preparations to introduce a minimum income requirement for the applicants, for example, are already well under-way.

A family with two children would be required to present proof of monthly net earnings of at least 2,600 euros.

“It's clear that the income requirements must be tightened. Everyone who wants to bring their family here must also be able to make a living, to work,” says Vuorio.

The minimum income requirement is currently applied only to people who married, for example, one of their compatriots after arriving in Finland. The requirement will in the future be applied to everyone who receives a positive family reunification decision during their asylum application process. It would not, on the other hand, be applied to people who have already been granted asylum in Finland.

Family reunification sponsors would therefore no longer be able to bring their families to Finland from their country of origin without the necessary proof of income.

Another possible requirement for family reunifications could be that the sponsor has participated actively in the integration process and possesses the necessary language skills.

“We've identified the measures at our disposal. It's a question of what will be chosen. The income requirement is in use in practically every country. It's also a clear and understandable measure,” says Päivi Nerg, a permanent secretary at the Ministry of the Interior.

The income requirement will not be applied to cases where the family reunification sponsor is under the age of 18 when a decision on their application is taken.

Refugee organisations have criticised the proposed, tighter criteria as unreasonable, arguing that they will effectively prevent family reunifications altogether. “Family reunifications should instead be made easier. The practices are already unreasonable. Human rights include the right to family life,” reminds Annu Lehtinen, the executive director at the Finnish Refugee Council.