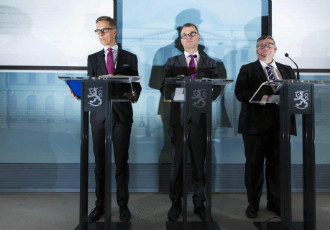 The legislative package that will result in dramatic changes in the terms and conditions of employment will be adopted on a permanent basis, contrary to the assurances made by the Finnish Government one month ago.

The Government has justified its decision by estimating that the legislative package cannot achieve its desired effects in three years.

The Government finalised its bill for coercive changes in the terms and conditions of employment and submitted it to the relevant parties for comments on Wednesday. The legislative package is contentious from a number of viewpoints: its impact assessments, for example, are based largely on presumptions and projections.

The coercive bill would reduce holiday pays by 30 per cent, remove allowances for the first day of sick leave, shorten annual holidays to a maximum of six weeks, and re-designate Epiphany and Ascension Thursday as unpaid holidays.

It would also prohibit labour market organisations from adopting improved terms and conditions of employment for three years. However, the changes to the terms and conditions of employment concerning sick leave allowances, Epiphany and Ascension Thursday, length of annual holidays and holiday pays would remain in effect also after the three-year period.

The legislative package would therefore allow for – but not guarantee – the adoption of improved terms and conditions of employment by labour market organisations after the prescribed period.

“It's theoretically possible that all of the terms and conditions are restored,” admits Juha Majanen, the deputy head of the Budget Department of the Ministry of Finance.

It also admits that the estimations are associated with notable uncertainty: “The impact of the measures will depend largely on the contents of the collective agreements introduced after the restrictions [have been lifted].”

The Ministry of Employment and the Economy estimates that the restrictions are not in violation of the constitution because they have been carefully defined, would only affect certain aspects of collective agreements, would not affect collective agreements already in effect and would remain in effect only for a limited time period. The restrictions to the freedom of contract, it estimates, are necessary and appropriate in light of the objectives.

In addition, the restrictions would not apply to agreements between employers and employees – or, employment contracts.

Tarja Kröger, a senior adviser at the Ministry of Employment and the Economy, says she is under the impression the legislative package was set to be temporary only with respect to the restrictions. “The constitutional issues deal specifically with this part,” she points out.

The legislative package is scheduled for implementation in mid-2016. The restrictions will according to the Ministry of Employment and the Economy apply to the collective agreements of both ordinary employees and civil servants introduced after mid-2016.

The Government has drafted the bill in an attempt to reduce the unit labour costs of businesses by five per cent and, thereby, the boost the competitiveness of domestic industries.

A key aspect of the package is that the social security contributions of private employers will be lowered by 1.72 per cent. The losses of 850 million euros consequently inflicted on the national economy will be offset mainly by cutting back on spending and revising the terms and conditions of employment in the public sector.

The changes set forth in the legislative package have been branded as coercive because the Government is seeking to restrict the right of labour market organisations to agree on the terms and conditions of employment. It is very rare for policy-makers to tinker with the benefits enjoyed by private sector employees.

The constitutionality of the changes has been called in to question for that very reason.

The impact assessments presented in the legislative package are debatable from various viewpoints. The Government proposes that the restrictions to the freedom of contract be enforced on a temporary basis simply to avoid hurdles at the Constitutional Law Committee. The Ministry of Finance has stated repeatedly during the draft process that the desired effects can only be achieved if the restrictions are adopted on a permanent basis.

Epiphany and Ascension Thursday would be re-designated as unpaid holidays in order to increase annual working hours.

Employees would consequently have to compensate for the working hours lost due to the holidays falling on a weekday by putting in extra hours in advance or beforehand. Employees on duty on Epiphany or Ascension Thursday will be entitled to their regular pay without Sunday work bonuses. The bonuses will be paid only if Epiphany falls on a Sunday.

The length of annual holidays, meanwhile, would be capped at six weeks by stipulating that employees can earn a maximum of three weekdays of annual holiday per month. The change would not concern certain occupational groups, such as public sector teachers.

Holiday pays would be cut by 30 per cent, but all new employees would be entitled to holiday bonuses. The bonuses could be adjusted upon an agreement with the employer.

The protection of employees in the event of re-structuring would be beefed up by obliging employers to offer employment training or education to employees laid off due to financial or production-related reasons. Employers with more than 20 employees would also be obliged to provide occupational health care services to their former employees six months after the lay-offs.

The legislative package will not be implemented if labour market organisations are able to agree on alternative measures to boost the competitiveness of domestic industries. The Government is scheduled to present the bill for parliamentary consideration next February unless an agreement on the alternative measures is reached.

The proposed changes, preparatory process and impact assessments have come under heavy criticism especially from trade unions. The members of the task force assigned to draft the legislative package were not allowed to express their dissent with the bill.

The unions have demanded that the stipulations set forth in the current collective agreements be restored after the prescribed period and are reportedly prepared to bring the bill before an international tribunal.