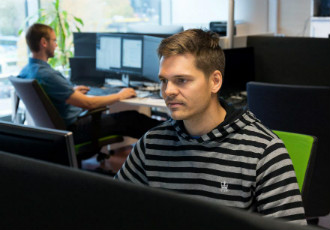 The walls of Relax Gaming's facilities near the passenger terminals in the Port of Tallinn are no strangers to the Finnish language.

Kalle Laukkonen, formerly a software engineer at Nokia and currently a product owner at the game studio, is pouring coffee into a mug with a picture of Teemu Selänne two years after moving from Tampere to Tallinn at the behest of his friends.

Work atmosphere is by far the single biggest difference between the two workplaces. “In Finland, I worked for a big company that was constantly reducing manpower. In Estonia, I'm working for a small company that's looking for more employees,” he describes.

A group of Finnish reporters are listening to a company presentation in a conference room next to the kitchen. More than one in three of the over 40 employees at Relax Gaming are Finns – and more is needed.

Estonia is already home to some 6,000 Finnish citizens.

“We were recruiting at Microsoft's centre in Salo on Tuesday,” reveals Natalja Vocht, the head of human resources at Relax Gaming.

The game studio provides employment to 15 and Tieto Estonia, a provider of information technology services, to 24 Finnish ICT professionals largely as a result of a recruitment project launched by the export promotion agency of Estonia last spring. Estonia is seeking to reverse the flow of migrants from the country and is confident in its ability to compete especially in the field of information and communications technology.

Work in Estonia, an employment service launched by the government, currently includes job vacancy notices from roughly thirty employers. The employers have made recruitment trips to Finland, while the export promotion agency has organised events for members of the media at workplaces in Tallinn.

“I was looking for a summer job in Finland and sent out a couple of applications. I was invited for an interview here,” Mikael Kalmi tells reporters from four Finnish media outlets in the facilities of Tieto Estonia in Tallinn.

“The atmosphere here was laid back, so I decided to stick around a while longer,” Kalmi, a marketing student at Estonian Business School, continues.

Whenever the employee of one of Tieto's corporate customers in Finland has forgotten their password and calls for advice, Kalmi or one of his 43 fellow IT support specialists with Finnish skills will pick up the phone in Tallinn.

Estonian employers do not disclose the wages they pay their employees. The employment contracts offered by Tieto Estonia, for example, explicitly prohibit the disclosure of wages as wages will be determined separately for each applicant.

Last year's financial statements indicate, however, that the 73 employees of Tieto Estonia earned an average of 2,400 euros and the 23 employees of Relax Gaming an average of 2,500 euros a month – more than double the average wage in Estonia. Both of the companies have since increased their workforce while the general income level in Estonia has also risen.

Finnish ICT professionals working in Estonia laud the atmosphere in Tallinn. Most of them call attention to the fact that public transport services are free to registered residents of Tallinn, while many also voice their delight with the data connections and online services.

“The spirit of getting things done here is like in Germany. People here appreciate if you're able to get a grasp on things quickly,” says Jussi Nieminen, an IT support specialist at Tieto Estonia who moved to Tallinn last summer.

“Everything in Tallinn is within walking distance. The atmosphere is nice,” says Tomi Wahlroos, an art director at Relax Gaming.

Laukkonen has similarly enjoyed his two years in Estonia. There is no shortage of culture or events and eating out is more affordable than in Tampere. The selection of rental flats, however, is one of the weaknesses of Tallinn, according to him. “In Finland, the wages of IT experts are close to those of other experts. In Estonia, the wages are notably higher than others,” he says.

The reporters have been invited for a lunch with Liisa Oviir, the Minister of Entrepreneurship, in the Old Town of Tallinn. She acknowledges that labour shortage is one of the most troubling problems for Estonia.

It is not only Estonian companies, however, that have turned their attention to Finland for IT professionals, but also their Swedish rivals. How can Estonia fare in competition against Sweden?