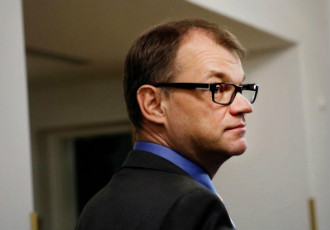 Prime Minister Juha Sipilä (Centre) estimated during his weekly interview on YLE Radio Suomi on Sunday that “a sustainable level” would be some 10,000 asylum seekers per year.

The Finnish Immigration Service (Migri) recently downgraded its estimate of the number of asylum seekers who are expected to arrive in Finland this year from 50,000 to 30,000–35,000. “These numbers are absolutely exceptional. This can't go on,” commented Sipilä.

Sipilä pointed out that the number of asylum applications has increased ten-fold from the previous year and that reception centres, accommodation facilities and authorities are living hand-to-mouth. “Everyone is currently at the limits of their capacity,” he summarised.

It is nevertheless unlikely that municipalities have to be forced to welcome asylum applicants, he estimated. “Municipalities have identified suitable properties for reception centres well enough on a voluntary basis.”

He pointed out that the measures already introduced have reversed the trend of people seeking asylum in Finland. The next step according to him is to ensure asylum applications are processed without any undue delay.

Sipilä also estimated that 35–37 per cent of the asylum seekers who have arrived in the country in 2015 have been granted asylum. “It's by no means a certainty that nearly all of the 35,000 asylum seekers receive a positive decision,” he reminded.

He called attention to the significance of understanding the decisions of asylum seekers who are fleeing conflict. “We also can't be wide-eyed about the fact that the asylum seekers also include people who aren't fleeing war but who've arrived here in search of better living conditions,” the Prime Minister emphasised.

Employment, he stated, is a key driver of integration.

“[We should get asylum seekers] working as soon as possible. That has to be the starting point,” said Sipilä.

He revealed that he receives a report of the arrival situation from law-enforcement authorities every night. “I go through the situation in various places in Finland every night.”

In addition, the Prime Minister stressed that he has not proposed that the European Union introduce a permanent burden-sharing mechanism but simply expressed his concerns about the course of action in the event that hundreds of thousands of people continue arriving in the continent through Greece and Italy.

“We have to do something about this.”