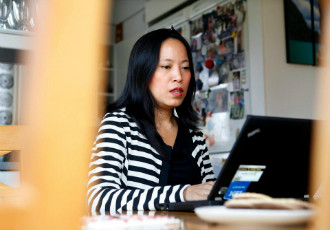 Finland has fallen behind a number of its fellow EU member states in attracting international experts to pursue a career in the country, indicate findings published by the European Migration Network (EMN) on Tuesday.

The findings published by the EMN came as no surprise to Kulchada Sanguannam-Rakkolainen. “There are a lot of pros to working in Finland, but they're thanks to the employer. I could also list a lot of aspects that are far from attractive,” she says.

Sanguannam-Rakkolainen is an electrical engineer from Thailand who is currently employed as a sales manager at the office of ABB, a multinational engineering group, in Pitäjänmäki, Helsinki. She sells synchronous motors used in the mining industry to, for example, Chile, China and Peru – although currently she is spending her autumn holiday at home in Espoo.

Her work community is considerably more international than the average work community in Finland: she has colleagues from Canada, China and the United States, and the working language at the workplace is English.

In Finland, ABB provides employment to a total of 180 people of a foreign background, who represent 46 different nationalities. Over 50 of its employees are from outside of Europe. Sanguannam-Rakkolainen, however, is one of only a few who have really settled down in Finland, having lived in the country for nearly 16 years.

“I wasn't planning on staying, but then I fell in love.”

She has stayed in the country because of her Finnish husband and now 12-year-old daughter. Her husband is similarly employed at ABB. “I haven't looked for jobs elsewhere in the world for a couple of years. Now, I wouldn't move further than Germany or Switzerland.”

An estimated 5,000 people move to Finland from outside the European Union-- from China and India, for example – every year for employment-related reasons. Roughly 1,000 of them are experts – that is, their job duties require a university degree and warrant a monthly wage of at least 3,000 euros, as defined by Migri.

Such experts are special also because, unlike other foreign workers, no labour availability consideration is necessary prior to granting them a work permit. Other employees arriving from outside the European Union are not granted a residence permit until it has been confirmed that no suitable workforce for the sector is available in Finland.

Employers are principally able to obtain a work permit for as many experts as they need – it will simply take some time.

“You have to take into account that the residence permit process takes at least a couple of months when recruiting or making internal employee transfers,” reminds Sirkku Krooks, a global mobility manager at ABB.

Employees moving from one country to another within the engineering group are according to her drawn to Finland largely due to the nature of their work duties. “Families with children especially face certain challenges outside the capital region in finding an international school, for example. Also, there's unfortunately nothing we can do about the weather.”

The winters have been tough also on Sanguannam-Rakkolainen. “I just advised someone moving from China to Finland to get good winter clothing to make sure they can exercise also in the winter. Many have to battle spring depression.”

Sanguannam-Rakkolainen ended up in Finland as a result of an internal transfer. She began her career at ABB in Thailand and was accepted into an international trainee programme organised by the engineering group.

“Nokia was the only thing I knew about Finland when arriving,” she says.

She was offered a job both in Finland and in Singapore after completing the trainee programme – and ended up selecting Finland. Although ABB is a multinational corporation that offers excellent career opportunities, it was family that rooted Sanguannam-Rakkolainen to Finland.

“The working culture at ABB makes it easy to be a female engineer. It's possible to combine work and family in Finland.”

Sanguannam-Rakkolainen applied for citizenship a few years ago because a Finnish passport would ensure she faced no unnecessary hurdles on her business trips abroad. “It was also about committing to my partner. I have to say, though, that receiving citizenship hasn't been made easy. The language test was difficult and long, frankly unreasonable, even though I thought I knew Finnish rather well.”

Living in Finland is not without its upsides, she also admits. “Although the taxes are high, you get a lot for your money. That includes free education, public transport, security. Whether or not those are genuine pull factors, though, I'm not sure.”

Even the acclaimed school system can be a disappointment to experts arriving in the country. “If I didn't hear constantly about how excellent the schools are, I wouldn't believe it based on my own experiences. Several Asian parents may feel not enough is demanded from their children at school,” she explains.