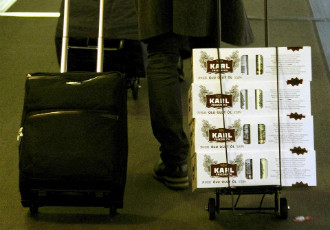 The personal imports of alcoholic beverages dropped by 11 per cent over the past 12 months, indicate statistics released by the National Institute for Health and Welfare (THL).

The imports dropped in comparison to the period between September 2013 and August 2014 across all beverage categories. The imports of mild and strong wines as well as mixed drinks fell particularly, by as much as 17 per cent year-on-year. The imports of spirits similarly fell by 12 per cent, while those of beer and cider decreased by only 2 per cent.

The personal imports of cigarettes and snus contrastively picked up between September 2014 and August 2015. The Finnish Tobacco Industry and the National Supervisory Authority for Welfare and Health (Valvira) reported last week that passengers brought a total of 600 million cigarettes and 10 million tins of snus into Finland.

The imports of snus have thereby increased by 65 per cent from the levels of 2008.