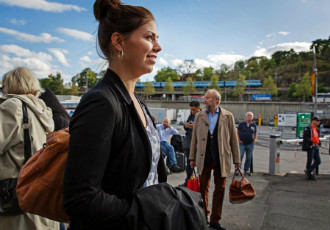 A larger labour market, a Swedish boyfriend, a laid-back atmosphere and opportunities to pursue an international career.

These are the reasons why Marika Aalto, a 25-year-old student of business administration, is intent on moving permanently to Sweden after completing her studies. Aalto, who is currently employed as an intern at the Finnish-Swedish Chamber of Commerce in Stockholm, is concerned that employment opportunities are few and far between in Finland – especially for the highly-educated.

“On the other hand, I'm also of the opinion that you'll find something if you have the will to look for work and [the patience] to wait a bit. That optimism is waning gradually, though, and naturally it all depends on your field [of expertise],” she says.

Aalto is far from the only one with such plans. An estimated 15,500 people – including roughly 10,000 Finnish citizens – emigrated from Finland in 2014.

Matti Saari, a senior statistician at Statistics Finland, predicts that emigration is likely to continue at a relatively high pace also this year. Preliminary data collected by the statistical office indicate that roughly 9,560 people moved out of Finland between January and August, representing an increase of a few hundred from the preliminary data collected a year earlier.

“The developments over the past couple of years include the effects of deep recession mixed with internationalisation,” analyses Saari.

Finns are drawn especially to other European countries. The majority of those who leave the country are of working age and usually hold a higher education degree.

Markus Penttinen, the head of international affairs at the Confederation of Unions for Professionals and Managerial Staff (Akava), reminds that recessions typically have a delayed effect on emigration statistics.

“Finland has been mired in recession for a while and there are no signs of a turn for better. Emigration will certainly increase from the current level unless a turnaround takes place soon,” he says.

A disincentive for the highly-educated to emigrate is the fact that abroad they will have to compete for jobs against a number of other nationality groups. “There's demand for labour force in the popular destination countries, Sweden and Germany, but there's also a healthy supply of labour force from all over the world,” Penttinen reminds.

People with a degree in the fields of commerce and technology, in particular, are interested in moving abroad due to the high demand for their expertise.

The trend cannot yet be compared to the mass emigration that took place in the 1960–1970s, when the annual number of emigrants hit tens of thousands. A return to a time when people left Finland in search of employment at production facilities in Sweden is very unlikely, according to Penttinen.

“The supply of production workers is so high all over the world today,” he explains.

Sweden has held on to its status as the most popular destination for emigrants from Finland although its popularity has declined in recent years. “Sweden has a larger labour market and more opportunities. Higher wages can also have an effect,” says Elli Heikkilä, a research director at the Institute of Migration.

She believes the enthusiasm to move abroad is being curbed by the fact that unemployment and economic uncertainty remain pressing problems also elsewhere in Europe.

Young people with higher education qualifications account for a growing share of the emigrants, according to Heikkilä. “For example, the young Finns who move to Sweden are on an average better educated than Swedes, statistically speaking,” she says.

“There didn't used to be as many jobs in the sector in Finland. Today, the employment situation in the care sector is relatively good,” explains Kirsi Markkanen, a development manager at the Union of Health and Social Care Professionals (Tehy).

A number of interesting employment opportunities have already caught the attention of Aalto. She has decided, however, to return to Finland next year to complete her studies.

Whether or not emigrants are willing to stay abroad permanently, Heikkilä tells, depends largely on their experiences in their first year abroad. Most emigrants return to their country of origin a year or two after moving abroad, but the longer they stay abroad, the less likely they are to return.

Aalto also predicts she will find it easier to employ herself in Sweden than her Swedish boyfriend in Finland. She declines to rule out the possibility of moving back to Finland, however. “It'll largely depend on work. I'm definitely not shutting the door on Finland,” she says.