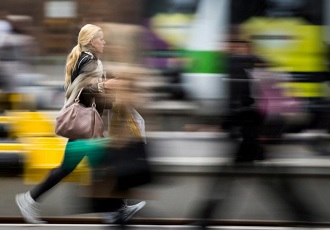 Passenger traffic on the railways of Finland may change considerably in the years to come.

The Ministry of Transport and Communications announced on Thursday that it will open up passenger rail traffic to competition and, as a result, break down the monopoly of VR and offer its rivals an opportunity to challenge its services.

The objective is to open up passenger rail traffic to competition as soon as in the first half of next year.

Onnibus, a low-cost coach operator, has already declared its interest in railway operations and even registered an auxiliary company name, Onnirail, in anticipation of the end of the monopoly. “[The announcement] isn't concrete enough to comment on, even though it does sound very promising,” says Pekka Möttö, the managing director at Onnibus.

The Government has previously announced that it will stop acquiring transport services in Siuntio and Northern Karelia, for example, in order to reduce its costs. VR is scheduled to operate its last services on the routes facing closure in March.

It is therefore possible that its rivals will begin their operations on the routes the Government is intent on closing.

The idea of a single company taking over loss-making rail traffic is far from appealing for Onnibus, however. “The proposal would be laughable if VR alone was responsible for all profitable rail services,” states Möttö.

Juha Honkatukia, an expert in the impact of de-regulation at the Government Institute for Economic Research (VATT), is an advocate of competition. “It could very well lead to the provision of higher-quality and more efficient services but for a lower cost. A precondition for that is that the rails have room for other operators,” he says.

The most popular routes, such as the one between Tampere and Helsinki, are currently relatively crowded.

Other key questions related to the proposed de-regulation include the fleet and whether or not competitors will have equal access to train depots. The manner in which the de-regulation will be carried out is subject to careful consideration at the Ministry of Transport and Communications.

The negotiations between the ministry and VR will revolve especially around an agreement granting VR exclusive rights to passenger rail traffic until 2024. The agreement will effectively have to be re-formulated.

Mikael Aro, the chief executive at VR, refrained on Thursday from speculating on the subject as the negotiations are only in their infancy. He reminded, however, that competitors must take into account the woeful state of the national economy and growing unemployment when making their investment decisions.

The de-regulation of passenger rail traffic stirred grave concerns at the question time of the Parliament on Thursday, with the opposition parties voicing their doubts over the future of loss-making routes.

Berner and Prime Minister Juha Sipilä (Centre) assured that certain operators have already expressed their interest in the routes facing closure. Berner also revealed that negotiations with the interested parties are already ongoing but declined to identify any of them.

The Government, she reminded, is also in talks with bus operators over market-based bus and coach services.

The public transport services in the capital region differ notably from long-distance services.

Helsinki Region Transport (HSL) is responsible for acquiring rail services for the seven municipalities it incorporates, but the legislation stipulates that VR is the only valid service provider. HSL is naturally an advocate of competition as means to allow it to put the services out to tender. It has nevertheless drawn up a plan to continue acquiring the services from VR until 2021.

The de-regulation of rail passenger services received support from randomly-picked passengers at Helsinki Central on Thursday.

“I'm in favour of opening them to competition if the fares go down and the services work. A ticket to Turenki isn't too expensive for me, though, because I'm eligible for a pensioner discount. The fare is seven euros per direction,” said Ritva Lilja.