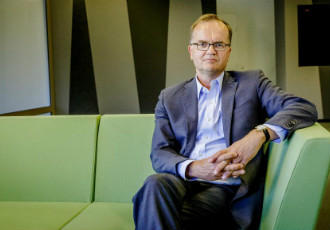 Pekka Soini, the director general of the Finnish Funding Agency for Innovation (Tekes), estimates that the proposed cuts in science funding will hinder the competitiveness of Finland.

“The cuts are so radical that they will cripple the system permanently. Finland will lose out on roughly 250 patents and a couple of hundred new products – every year – as a result of the spending cuts,” he cautions.

The Government is intent on slashing the funding of Tekes by a total of 138 million euros. Savings of 95 million euros will be generated by slashing research and development funding, savings of 35 million euros by running down the Strategic Centres for Science, Technology and Innovation (SHOKs) and savings of 8 million euros by pulling the plug on Innovative Cities, a programme launched in an attempt to create innovation clusters in provincial centres.

Soini reveals that the spending cuts were not discussed with Tekes in advance. “There was no dialogue with Tekes. The scope of the cuts took us all by surprise.”

Matti Alahuhta, the board chairman of the Confederation of Finnish Industries (EK), voiced his concerns about the cuts in science funding last week, cautioning in an interview with Helsingin Sanomat that the cuts will undermine the strengths of Finland, such as the co-operation between businesses and universities.

“One-fourth of Finnish businesses with international product development and other operations collaborate with universities. We're number one in the world in that respect. The founding of Tekes in the 1980s gave rise to that culture. And now it'll be cut,” he laments.

Regardless, the Government has identified co-operation between industries and universities as one of its spearhead projects. “It's undeniably conflicting,” admits Soini.

He remains hopeful that some of the roughly one billion euros the Government has set aside for the spearhead projects will be injected into Tekes. A temporary funding arrangement would not suffice for long, however.

“We'll do our utmost to increase our basic funding,” he affirms.

The cuts laid out by the Government would reduce the annual research, development and innovation funding of Tekes to 231 million euros – less than half of the level of 2011. The Government of Alexander Stubb already reduced the funding by 126 million euros.

Soini also cautions that the discontinuation of the oft-criticised SHOKs is short-sighted. “We've stepped up our operations following an international assessment of SHOKs a couple of years ago. SHOKs set their sights high and far. We weren't expecting commercialisable results until 5—10 years from now, at the earliest,” he says.

SHOKs are operated by joint ventures set up by businesses and research centres. Some of the joint ventures may according to Soini continue their operations despite the funding cuts.

The rationale of the Government is that tighter purse strings will promote innovation, whereas generosity will spawn inefficiency.

A group of three well-known economists, Bengt Holmström, Sixten Korkman and Matti Pohjola, wrote in a memorandum on the financial woes of Finland last year that it would be misguided to think that innovation activities can be improved simply by raising the funding.

“An appropriate scarcity of resources and well-placed challenges and restrictions, in turn, are an incentive,” they wrote.

Soini is careful not to shoot down the notion.

“The research funding of universities in Finland is at a high level in international comparison, but the activities could be more focused than today. Fewer units and larger projects could help ensure the funds aren't scattered about excessively. You may be able to achieve more with less in this particular case.”

The same logic does not apply to businesses, he adds.

“The public sector has invested very little in the research and development efforts of businesses from a global viewpoint,” he points out.