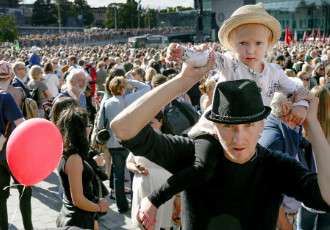 It turned into a large demonstration, much larger than anyone could have imagined.

A sea of roughly ten thousand people flooded Kansalaistori Square on Tuesday to demand an end to racism.

“We've become accustomed to racism, and we must resist this habit. We've been silent for far too long. It's time to say out loud that this will not stand,” Member of Parliament Ozan Yanar (Greens) said in his speech at the demonstration.

The We Have a Dream demonstration was organised only a couple of days after Member of Parliament Olli Immonen (PS) published his piercing attack on multiculturalism on Facebook. Smaller sympathy protests were on Tuesday held in Oulu and Tampere, with several lawmakers and pop musicians among those in attendance.

“I believe [this event] is an indication of the public's very healthy reaction. The majority of Finns understand what multiculturalism, openness and tolerance signify and why they are necessary,” Erkki Tuomioja (SDP), a Member of Parliament and a former Minister for Foreign Affairs, commented to Helsingin Sanomat.

He admitted that immigration is not without its challenges but voiced his confidence in the ability of Finland to learn from its mistakes.

Irja Askola, the Bishop of Helsinki, estimated that Immonen may have ended up doing Finns a favour with his provocative outburst. “We must now truly start talking about and facing our fears,” she said.

The most frosty welcome was offered to Matias Turkkila, the editor-in-chief of the official mouthpiece of the Finns Party, who stepped onto the stage amid roaring jeers. “There are so many of you and you're angry. Everyone in this country has felt awful for the past five days. My party comrade Olli has unfortunately made quite a few people angry and a number of people afraid.”

His speech was interrupted by constant howls and jeers.

“I don't like racism. It's disgusting. Many of you now expect me to say ‘but’, but I won't,” he said, drawing out muted applause from the attendants.

Musician Anssi Kela voiced his regrets to Helsingin Sanomat that Suomalainen, a song about racism he released already in 2007, remains topical in modern-day Finland.

“Finland is home to many people who were born, brought up and schooled here, speak Finnish as their mother tongue, work hard and pay their taxes – and yet they're told every day to go back to Africa,” he lamented.

The attendants were also read a letter from President Sauli Niinistö that ended in the following words: “We need a dispassionate and matter-of-fact debate on the difficulties both immigrants and recipients face. Finland has always known how to pull together, and I am confident we are able to do that also today.”