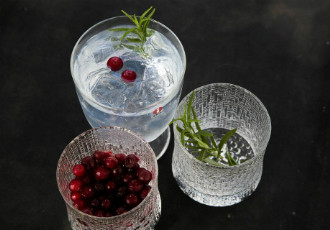 The best gin and tonic in the world is made with Napue Gin, a product of the newly-founded Kyrö Distillery Company in Isokyrö, Finland.

This is the conclusion reached by the 250 experts from all over the world who sit on the judging panel for the International Wine and Spirit Competition (IWSC) after an exhaustive blind-tasting process.

Winning a gold medal at the annual competition is considered among the highest recognitions in the global wine and spirits industry. The IWSC is the oldest and most prestigious competition in the industry, having been established already in 1969, and is participated by wineries and distilleries from 90 countries every year.

The Gin & Tonic competition, which was held for the very first time, alone received submissions from 150 distilleries. The winning submission, Napue Gin, was lauded for its smooth and sophisticated taste.

The Kyrö Distillery Company is astonished by the recognition gained by their gin. None of the five friends from Isokyrö could have imagined a few years ago the Napue Gin would take down the competition.

The idea to establish the distillery was conceived after an evening of sipping rye whisky. “We were wondering why no rye whisky is made in Finland. We decided immediately to put our money where our mouth is,” says Mikko Koskinen, the head of marketing at Kyrö Distillery Company.

The distillery was set up in a former cheese dairy and the whisky production began early last year. After the first batch of rye whisky received a warm welcome, the men decided to venture into the trending gin market.

Gin is traditionally distilled from grain and juniper berries. A total of 16 herbs are used to make Napue Gin, with cranberry, common sea-buckthorn and meadowsweet giving the liquor its unique, stylish taste. The liquor was named after the final battle of the Great Northern War that took place in Isokyrö in 1714.

“We were remarkably lucky. We entered the market at the right time with the right product,” says Koskinen.

IWSC plans to make Napue Gin available on Amazon.co.uk, which can boost both its sales and international recognition. Napue Gin can already be found on the shelves of Alko.