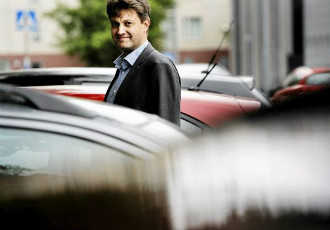 There will be no roadside parking places in Helsinki 15 years from now.

It will instead be possible to have a self-driving car pick you up in ten minutes by pressing a button on your smartphone. The ride service will be similar to a modern-day taxi service or Kutsuplus, an on-demand bus service launched by Helsinki Region Transport (HSL) in 2013, depending on the service provider.

The car will continue its journey immediately after you have reached your destination.

Self-driving cars will account for the vast majority of road transport in 2030, states Sampo Hietanen, the chief executive at Intelligent Transport Systems (ITS) Finland. People, in turn, will have reclaimed the streets, wide cycleways will have become more common and restaurants will have spread out into the streets. Trees will grow in places that only a few years ago were occupied by cars hour after hour.

Hietanen is concerned, however, that the entire transport system will be controlled by Google.

No more parking space
The number of cars on the streets of Helsinki will decrease by as much as 90 per cent by 2030, depending on the number of passengers riding in each car. No one will be sitting behind the wheel, however, as the cars will zip through the city with the help of a computer communicating with other vehicles on the road.

There would be no need for roadside parking space even if public transport was superseded entirely by self-driving cars, found a simulation conducted by the Organisation for Economic Co-operation and Development (OECD) in Lisbon, a city roughly the size of Helsinki.

The elimination of roadside parking space was shown to free up 20 per cent of the space cars occupy for other uses – offering new perspectives on city planning.

The simulation also found that the introduction of self-driving cars could render 80 per cent of other parking space obsolete. On the other hand, it could also bring about problems as parking garages cannot be transformed into something of value overnight.

The need for parking space is expected to diminish along with a projected decrease in car ownership. The self-driving cars would be re-charged and maintained at service centres located along the ring roads.

“I doubt too many are interested in owning a robotic car. Owning a car is basically a nuisance. It'll be good for people, good for natural resources and good for parking once it's no longer necessary [to have your own car],” says Juha Kostiainen, the head of urban development at YIT.

Even privately-owned robotic cars would probably create a variety of convenient ride-sharing and rental services around them. “Why keep a car exclusively in your own use when you could send it to get back the invested capital with the press of a button?” asks Hietanen.

To rephrase Thomas Edison: the alternatives must be so cheap that only the rich will drive their own cars. Hietanen for one would not be surprised if driving a car in downtown Helsinki was prohibited altogether sometime in the future.

Although self-driving cars may replace feeder bus lines, the need for a comprehensive rail network will only increase as the cars will zip through the city tirelessly, with every available car being in use during rush hours. There will be fewer cars on the roads, but their combined mileage will exceed that of the cars in use today.

Kostiainen doubts it will ever be possible to replace a well-functioning public transport system.

Helsinki has consequently invested in the concept of transport as a service – that is, the provision of a variety of transport options by service providers for a monthly subscription fee.

The electric bicycle may according to Hietanen prove an even more popular mode of transport in urban areas than self-driving cars. The bicycle is typically also the fastest way to reach your destination from a metro station, for example.

Automation technology may transform bus transport even before the introduction of driverless taxis, estimates Reetta Putkonen, the head of transport and traffic planning at Helsinki. “Drivers' wages are the greatest expense for public transport operators. If there's no need for drivers, you can re-design public transport on the basis of a totally different cost structure,” she points out.

The automation of bus transport could translate to a considerable increase in the number of bus lines.

Not if, but when
Cars will soon drive themselves, that is no longer subject to debate.

Google has invested billions of euros in the development of robotic cars, whereas traditional automotive manufacturers are hot on the heels – if not ahead of – the technology behemoth.

In addition, investors have so much confidence in Uber that its market capitalisation is nearly 40 billion euros. The ride-sharing service is valued highly because it is expected to spearhead the development of and become a market leader in automated taxi services.

“Transport is the second largest expense for households, gobbling up some 300 euros every month. It's ten times as big a business as telecommunications and the largest system in the world. When it changes, everything changes,” explains Hietanen.

The automation of transport is inevitable particularly because it represents one the few remaining productivity leaps. The utilisation rate of modern-day cars is appalling: cars are parked an average of 96 per cent of the time.

“The benefits are shockingly high. 95 per cent of accidents are caused by people. Those will become a thing of the past. Drink-driving will not be an issue even though people will certainly travel by car while intoxicated,” Hietanen tells.

Road accidents will not disappear altogether, however, and the role of robotics in deadly accidents will stir up notable public debate. What is more significant, Hietanen argues, is that the number of accidents will decrease by more than 90 per cent following the introduction of self-driving cars.

The greatest change for people commuting by car will be that – instead of the steering wheel – they will have 90 minutes more time on their hands every day.

“When transport becomes banal, cars will become fast-moving offices, cafes, gyms or living rooms. You can claim that the freed up time will be offered to employers but how many of us actually believe that?”

Pros and cons
“Self-driving cars and the transformation of public transport are absolutely wonderful from the viewpoint of cityscape, convenience, emissions and accessibility,” summarises Kostiainen.

The cities of future will be better from a number of viewpoints but worse from others, reminds Hietanen. “Who will manage the transport systems? You can't be fully content if that's Google,” he states.

Helsinki and Finland have according to him a couple of years to create a transport system that also allows local service providers to thrive. The opportunities are certainly real. “But if we're not on our toes today, someone else will make the revolutionary step and we'll have to follow the leader,” says Hietanen.