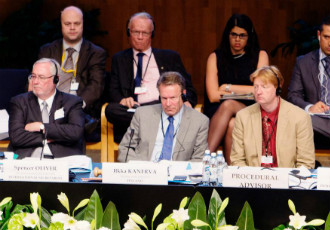 The crisis in Ukraine took centre stage as the Parliamentary Assembly of the Organisation for Security and Co-operation in Europe (OSCE) began its annual session in Helsinki on Sunday, despite the absence of a full delegation from Russia.

“Ukraine will be the hot issue throughout the week,” Ilkka Kanerva, the president of the OSCE Parliamentary Assembly, estimated late on Sunday.

The session in Finlandia Hall began a few minutes behind schedule, while the only delegate from Russia, Nikolay Kovalev, arrived at the venue over an hour late. Kovalev is only expected to attend the session on Sunday after Russia's decision last week to send him to Helsinki contrary to its earlier statements.

Finland, in turn, announced on Wednesday its decision to deny entry to six Russian delegates on grounds of the travel bans introduced by the European Union. The annual session commemorates the 40th anniversary of the OSCE and the so-called Spirit of Helsinki.

Kanerva voiced his regrets about the situation.

He also revealed that he has sat down with Kovalev in private. “I explained why Finland decided to stick to the travel bans enforced by the EU,” he said.

“The situation is abnormal in light of the fundamental idea of the OSCE. Russia would have particularly much to say about Ukraine and an opportunity to present its own views,” Oscar Mina, the head of the delegation from San Marino, lamented while walking into the conference room.

Doris Barnett, the vice president of the Parliamentary Assembly, said that an extraordinary meeting on the situation in Ukraine will be organised sometime during the one-week session. “A second party would also be needed for the talks, but now they'll be regrettably one-sided,” he acknowledged.

Kanerva assured that the issue will not be ignored.

Mina deemed it unlikely that formal negotiations on the issue will be held. “I think the issue will be discussed around the water-cooler and in other contexts,” he said, declining to comment on whether or not Finland should have allowed delegates affected by the travel bans to enter the country.

Barnett, in turn, estimated that the decision was that of Finland alone. “Finland has the right to decide independently whether or not to invite people affected by the EU's travel bans. The OSCE, however, approaches the issue from a broader perspective and would be willing to relax the sanctions in an attempt to establish a dialogue. The OSCE without Russia makes no sense,” he phrased.

Elsewhere, Roberto Montella of Italy was elected the Secretary General of the OSCE Parliamentary Assembly on Sunday. Montella was a good choice for the position, according to Kanerva. “Montella has worked for six international organisations. His experience is wide-ranging,” he said.

Montella has, for example, previously served as director for the OSCE in Vienna.

This year marks the 40th anniversary of the Helsinki Final Act, the final declaration of the predecessor of the OSCE signed by 35 nations in Helsinki on 1 August in 1975. Nearly 300 Members of Parliament from over 50 countries will take part in the annual session between 5 and 9 July.