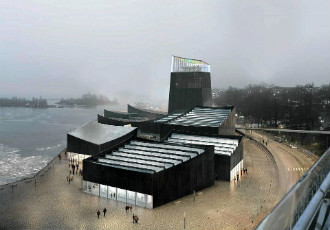 Only a handful of councillors for the City of Helsinki are ready to voice their support for Guggenheim Helsinki, finds a survey carried out by Helsingin Sanomat.

No more than 6 of the 69 councillors reached by the newspaper on Tuesday said that they are willing to proceed with the museum project if the city has to cover most of its costs. A total of 31 councillors contrastively expressed their opposition to the project, while 32 refused to comment on the matter altogether.

Arguments against the project are largely financial. The City of Helsinki is currently set to contribute most of the 130 million euros the construction project is expected to cost.

Ari Lahti, the chairman of the Guggenheim Helsinki Supporting Foundation, revealed on Tuesday that the foundation has raised over ten million euros in private donations for the construction. The sum represents over one-third of the 28 million euro donation target but falls short of the intermediate target of 14 million euros set for June.

Lahti estimated that the fundraising campaign is behind schedule due to the economic conditions in Finland and the unwillingness of certain potential donors to commit before the city has made up its mind on the project.

The necessary funds should be scraped together by the time a final decision on the project is due, presumably in the first half of 2016.

A number of councillors refused on Tuesday to comment on the project before more information about its costs and other details have been made public.

Harry Bogomoloff (NCP) stressed that unlike Bilbao Helsinki is not in need of a stimulant. “Pori is the town you should compare to Bilbao,” he said, referring to the fact that a Guggenheim Museum has boosted tourism in Bilbao, Spain, after opening to the public in 1997.

He also likened the winning entry to the architectural design competition for Guggenheim Helsinki to the coal stacks in front of the Hanasaari Power Plant.

Pia Pakarinen (NCP), in turn, is prepared to welcome the museum to Helsinki. “I sincerely hope that the Guggenheim [Museum] is built. It would be a boost to the art scene. It would also serve as stimulus,” she said.

The Guggenheim Museum and Foundation set its sights on Helsinki already in 2011 and has refused to scrap the project, despite the project being rejected once by the Helsinki City Board.

Richard Armstrong, the director of the Guggenheim Museum and Foundation, said after announcing the winning entry to the architectural design competition that Helsinki is an appealing location due the equality and democracy of Finland as well as the unique relationship of Finns with art, architecture and design.

Follow-up questions posed to him helped shed light on a number of other reasons. “A strong airport, Asian and Russian tourists, the growth potential of cultural tourism, a stable economy and firm political leadership,” Armstrong listed.

Veronika Honkasalo (Left Alliance), however, voiced her doubts about the ability of the mooted museum to attract visitors from Russia. “The geopolitical situation has changed since the plans for Guggenheim [Helsinki] were initially laid out. It was expected to bring a flow of Russian tourists to the city, but would no longer be the case,” she argued while taking part in a discussion event in Sanomatalo.

The survey by Helsingin Sanomat also found that support for the construction project would increase considerably if private donors and the central administration covered a larger share of the costs.

“Guggenheim would have my support if it was built one hundred per cent with private funds. If Guggenheim is indeed such a good business, surely it should be able to sustain itself,” commented Mika Raatikainen (PS).

Donations, however, have yet to pour in and the Government of Juha Sipilä (Centre) has yet to consider its possible role in the museum project.

“That time will come once there's a concrete proposal for what role the Government should take in the project. The thought of Guggenheim is fascinating, but whether or not it's feasible, I'm not sure yet,” Sanni Grahn-Laasonen (NCP), the Minister of Education and Culture, writes in a bulletin.

The architectural design competition for Guggenheim Helsinki was funded by private donations. The project will next be presented to the City of Helsinki for consideration.