The coal stacks and combined heat and power plant that define the skyline of Hanasaari may soon have to make way for tower blocks of up to 17 stories, indicate preliminary sketches drawn up by the City Planning Department of Helsinki.

Documents provided to Helsingin Sanomat by the City Planning Department suggest that Hanasaari could be transformed into a neighbourhood of 5,000—8,000 residents by the late 2030s.

“I have to emphasise that at this stage the sketches are only an attempt to shed light on the scale, not a plan per se,” underscores Tuomas Hakala, a project manager at the City Planning Department.

His responsibilities presently entail the development of the adjacent Kalasatama, where a handful of 20—35-storey high-rise buildings are already under construction. Six of the eight high-rise buildings have been designated for residential use, while the tallest one is set to rise more than 130 metres above the ground. 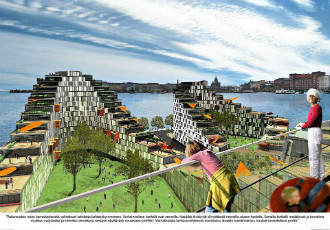 Hakala reminds that if high-rise buildings are also built in Hanasaari they would have to be notably smaller than in Kalasatama. “We may still look into the possibility of high-rise construction in the area, but it's too early to tell what we'll build if we decide to shut down the power plant,” he says.

The City Planning Department can decide to shut down the combined heat and power plant as early as in the 2020s. A strong signal in favour of the closure was sent on Wednesday as the board of directors of the local energy utility, Helen, proposed that the power plant be shut down as part of the adoption of a new energy production model.

Hakala believes the first tower blocks in Hanasaari could be completed a few years after the closure of the power plant. Overall, the development of Hanasaari into a residential area would take approximately 15 years.

The decision to designate Hanasaari for residential use would be good particularly from the viewpoint of city planning, he adds.

The re-development of Hanasaari is directly linked to the efforts of Helsinki to move towards carbon-neutral energy production. The board of directors of Helen is confident that the objective can be met by investing in renewable energy solutions, such as the construction of a new pellet fuel plant in Salmisaari and a bio-energy heating plant in Vuosaari.

In addition, the board of directors proposes that the use of solar power and geothermal heat be increased in energy production.

The proposal would cost an estimated 360 million euros – considerably less than any of the other alternatives on the table.

For example, the construction of a new combined heat and power plant in Vuosaari would cost an estimated 1—1.2 billion euros and the modernisation of the power plants in Hanasaari and Salmisaari some 500 million euros.

Although the board of directors of Helen decided unanimously to propose an energy production model with an emphasis on renewable energy, it reminds that none of the options are economically feasible.