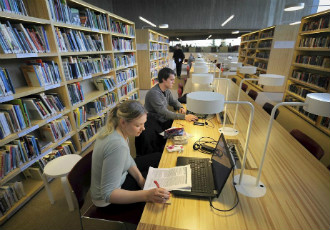 The number of public libraries has decreased sharply over the past three-and-a-half decades, indicates a set of cultural statistics published by Statistics Finland.

The decrease can be largely attributed to municipal consolidations and the consequent consolidations of libraries into larger units. The number of institutional libraries has similarly fallen to a mere sixth of the levels of the 1980s.

“That, in turn, has been caused at least partly by advances in health care,” analyses Kristiina Kontiainen, a head of division at the Finnish Library Association. “People no longer stay in hospitals so long as to require special libraries as much as they used to,” she explains.

The tight-knit library network of Finland began to deteriorate already during the economic down-swing of the 1980s as many rural municipalities replaced their smaller libraries with library buses, which became common in the 1970—1980s. Many of the buses, however, have not been replaced after coming to the end of the road.

Kontiainen believes the number of small libraries will continue to decrease.

“Funds used to be earmarked for the renovations of libraries in the act on state subsidies to municipalities but that changed at the start of the year. Finland has so many mould-ridden schools that I'm afraid they'll gobble up all the subsidies. Municipalities are reluctant to renovate their old, deteriorating libraries,” she says.

Meanwhile, the collections of digital contents, recorded music and video, and various devices has grown to account for over 11 per cent of library collections.

The number of loans and both physical and online visits have also declined. Last year, public libraries lent nearly 70 million books, representing a 17 per cent decline from the peak year of 1994. The loans of recorded music and other contents have similarly decreased as the popularity of various online streaming services has increased.

Kontiainen gauges that the decrease in lending is “a sign of something” but insists that there is little reason for concern. “Globally, Finland is a superior library country in terms of loans and visits. There's room for a slight decrease in the levels,” she says.

Last year, the Finnish Library Association challenged all municipalities and libraries to a race for visitors. The winner – and consequently the best library municipality in the world – was Nurmes, a small town in North Karelia where each of the roughly 8,000 residents made an average of 15 library visits and 25.4 loans in 2014.