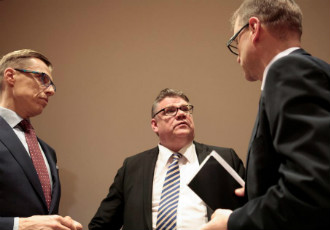 The spending cuts laid out by the Government would bolster the economy considerably and reduce the debt ratio by the end of the electoral term, the Bank of Finland estimates. On the other hand, they would curb economic growth and exacerbate the unemployment problem by gnawing away at aggregate demand.

Overall, the impact of the cuts on economic growth will hinge on the ability of the Government to improve the cost competitiveness of businesses, the Bank of Finland gauges.

Unit labour costs measure the cost of labour per a unit of output and can thus be reduced by cutting wages or improving labour productivity.

The agreement would also boost economic growth above the rates projected by the Bank of Finland for 2017—2019 – to up to 2.9 per cent in 2019 – by encouraging private investments and export activities.

The Bank of Finland has drafted two alternative projections about the fiscal policy changes pursued by the Government. The first projection presumes that an agreement with labour market organisations is not found, the second that an agreement is found.

“My gut feeling is that the effects of the social security cuts on economic growth may have been underestimated because those affected by the cuts spend a larger-than-average share of their income. The effects of the social contract, in turn, seem encouraging. I believe the Bank of Finland has made the calculations carefully. The first alternative demonstrates mercilessly the negative effects of stringent fiscal policy on economic growth,” analyses Markus Jäntti, a professor of economics at Stockholm University.

The public debt is expected to continue its growth in 2025 due to a rise in health care and social welfare costs brought about by the ageing population.

On Wednesday, the Bank of Finland also unveiled an economic outlook that does not take into account the recovery measures laid out by the Government. The outlook is considerably bleaker than those published by many research institutes in March.

It confirms that the economic woes of Finland have aggravated over the first few months of the year. Statistics released by the Finnish Customs, for example, indicate that goods exports fell by two per cent between January and April.

Domestic risks, in turn, are linked to the success of the economic policy.

Erkki Liikanen, the Governor of the Bank of Finland, reminded that the economic problems are severe and that no signs of a robust recovery have been observed. Wage moderation and other measures, he believes, are therefore necessary to promote the cost competitiveness of businesses.

The measures laid out by the Government are justified, he concluded.