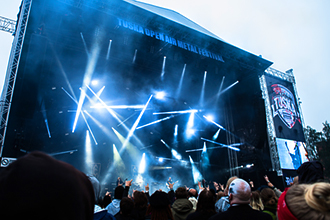 FROM JUNE 26 to June 28 the 18th edition of the Tuska Open Air Metal Festival will open its gates to the predominantly black clad crowds. The festival is held at Suvilahti, a former energy production area that is very easily reached from the city centre with metro, trams and busses. Two gasometers give the place a unique feel and create an iconic skyline.

The diverse roster of bands from Finnish favourites to international metal super stars will rock three different stages. The Radio Rock Stage and Inferno Stage are outdoors while the Club Stage is located inside the Kattilahalli building, giving the concerts held in there a more intimate feeling as well as providing shade or cover from rain, depending what weather the metal gods will bestow on this year’s festival.

The main head liners this year are Sabaton on Friday and In Flames on Saturday – a Swedish metal package full of power. On Sunday, Alice Cooper will be the last act and make sure the 2015 Tuska edition will end with a spectacular show.

Other festival highlights are Amorphis’ anniversary show in honour of their genre defining Tales From The Thousand Lakes album – they will perform the classic in its entirety. Also Stratovarius will give a special concert and play the album Visions. Norwegian black metal legend Abbath will have his first show ever with his new band that consists of himself, bass player Tom Cato Visnes aka King Ov Hell and drummer Baard Kolstad.

Finnish bands like At The Hollow, Ghost Brigade, Mokoma, Shiraz Lane and Sotajumala will make sure there is music for every mood from melancholic melodies to blast beat death metal and festival mood inducing rock. The international acts will bring metal from all over the world to Helsinki: Exodus from the USA, Loudness from Japan, Einherjer from Norway and Opeth from Sweden amongst many others. 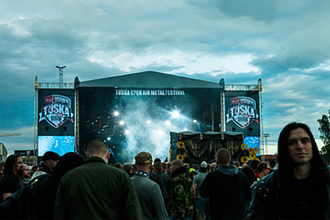 The food booths, the Alepa supermarket and different beer areas will take care of the physical well-being. This year it is possible to dine in true (black) metal style: the Black Dining restaurant will serve blackened main dishes for both vegetarians and carnivores.

Of course, also this year the festival goers have the option to enjoy even more live music at the pre-and after parties. From Thursday to Sunday evening there are concerts held at Tavastia, Semifinal, Virgin Oil Co. and On The Rocks: Bands like Amoral, Fear of Domination, Profane Omen, Turmion Kätilöt and Whorion and will make sure that no one has to go home early if they don’t want to.

The festival offers a variety of ticket options: from 255 € for the three day Tuska Turbo VIP package to 125€ for a normal three day ticket and 100€ respectively 70€ for a two or one day ticket. Tickets can be exchanged for wristbands at the festival site. All information and updates can be found on http://www.tuska-festival.fi/ as well as on the Tuska app (available for iOS, Android and Windows Phone).