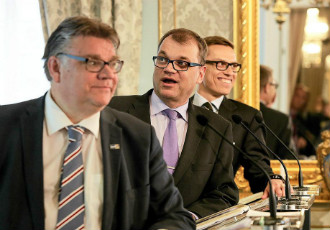 A proposal to be presented by the European Commission at the end of this month for a mandatory refugee re-settlement system within the European Union is unlikely to receive the backing of the next Government of Finland.

“It has to be based on the voluntariness of member states,” Alexander Stubb (NCP) stated after taking part in the ongoing coalition negotiations on Wednesday.

The proposal is an attempt to distribute the burden created by refugee flows especially into Southern Europe more evenly between member states of the European Union. The European Commission proposes that member states be allowed to decide on the re-settlement of asylum seekers within the union by an absolute majority in the event of an emergency.

The re-settlement system would only be applied to asylum seekers who are unequivocally in need of international protection.

“It's difficult to imagine that the European Union would use the ordinary legislative procedure to decide, for example, on the distribution of burden,” Stubb said.

Opponents of the proposal have also called into question the legal basis for the re-settlement system.

The proposal will be on the agenda of the next European Council meeting in late June.

Under the proposal, asylum seekers who have crossed the Mediterranean to Italy could be flown to Finland, which would be responsible for assessing whether or not they are in need of protection. Asylum seekers from Syria and Eritrea, for example, would meet the conditions for protection.

The proposal would oblige Finland to receive 1.72 per cent of asylum seekers who are re-settled within the European Union from their country of arrival. The percentage has been determined by the European Commission on the basis of four factors: the population, gross domestic product, number of current asylum seekers and unemployment rate of the member state.

Germany, in contrast, would be responsible for 18.42 per cent of asylum seekers re-settled within the union.

The re-settlement system is part of a comprehensive immigration strategy unveiled by the European Commission on Wednesday in response to the pressing refugee crisis in the Mediterranean, which has already claimed thousands of lives.

“Migration flows are the joint responsibility of all member states,” Federica Mogherini, the High Representative of the Union for Foreign Affairs and Security Policy, stated in Brussels.

In addition, the European Commission proposes that member states of the European Union accept a total of 20,000 quota refugees from third countries – namely, from North Africa – in order to mitigate the refugee crisis caused by the hostilities in Syria. Finland would under the proposal be obliged to accept 293 quota refugees.

“We have no issues with the quota refugees,” said Stubb.

The proposed quota for Finland is effectively so small that it would have no impact on the decisions of the country regarding its national refugee quota. It has already been agreed in the ongoing coalition negotiations that Finland will maintain its refugee quota close to the levels of recent years.

Hereby, Finland can demonstrate that it does not shy away from its international responsibilities, said Timo Soini of the Finns Party.

No more than 14 member states currently accept quota refugees – a total of 5,500 per year. The share of Finland is relatively large especially after the country raised its annual refugee quota from 750 to roughly 1,050 due to the crisis in Syria.

“Finland is relative to its population one of the top countries in receiving quota refugees,” Stubb highlighted.

Finland estimates that it could incorporate the proposed quota to its existing national quota.

The European Commission is also eager to promote legal immigration within the European Union by overhauling the so-called Blue Card – a residence and working permit granted to high-skilled immigrants.

Germany, however, is currently practically the only member state to take full advantage of the union-wide system. Other member states have criticised the system as bureaucratic and prefer their national permit procedures instead. Finland, for example, granted a Blue Card to no more than five applicants in 2013.

Moreover, the European Union is prepared to step up its efforts to combat criminal organisations involved in human trafficking in an attempt to stem the flow of migrants crossing the Mediterranean. The union is also set to deploy personnel to member states struggling to cope with the number of asylum seekers.