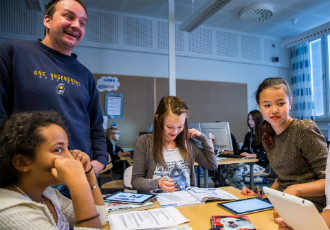 Pupils in class 6A of Veromäki School in Vantaa have gathered into the classroom for what appears to be an unorthodox lesson: Ann-Sofie Gussander is writing her learning diary on a tablet, Hasen Banimuslim is learning biology on a desktop computer, while Ada Niinikoski is solving maths problems on a piece of paper.

Altogether, there are 18 pupils and 23 devices in the classroom.

“Pupils doing the same thing while sitting in a row in front of the teacher is outdated. The world is digitising,” declares class teacher Markus Humaloja.

He has developed his teaching methods as the City of Vantaa has increased the availability of tablet, laptop and desktop computers in schools. In addition, he has begun teaching his colleagues how to make better use of such devices in the classroom.

“Teachers manage to beat upper secondary school pupils with their skills, but as you move on to secondary education they're overtaken by young people,” researcher Meri-Tuulia Kaarakainen says.

Teachers have similarly fallen notably behind other occupational groups in computer literacy. “The highest test score was 72. The average teacher only received 28 points. The 60 point mark was reached in the communications technology sector and the 45 point mark in the media sector. Even municipal clerks fared better than teachers, receiving 30 points. They're typically older women,” Kaarakainen points out.

The results, she believes, are an indication of how poorly information technology is currently utilised in teaching.

“Employers don't expect or demand that it's used in all schools. Many teachers would require training in the very basics. Age is also a contributing factor: younger teachers have better skills. Similarly, men have better skills than women. They learn the skills in their free time,” she says.

Rather surprisingly, the study also found that the information technology skills of teachers and pupils are not determined by the availability of computers and other electronic devices in schools. “They pick up [the skills] at home in their free time,” explains Kaarakainen.

Humaloja nonetheless estimates that teachers are both more interested in and capable of utilising information technology in teaching. The introduction of electronic devices to the classroom has also yielded positive feedback from pupils, he adds.

The Parliamentary Ombudsman of Finland has called attention to marked differences in the utilisation of information technology at primary schools. The differences were detected in inspections carried out in a couple of large cities in Finland.

“It was shown that there's considerable variation in skills and the number of devices. In addition, schools are currently mulling over whether or not to allow pupils to use their own devices in the classroom. This is evident from the complaints we receive,” says Jorma Kuopus, a senior legal adviser to the Parliamentary Ombudsman.

The Chancellor of Justice, in turn, has ruled that pupils and students should have equal, free access to electronic devices regardless of the school they attend.

Kaarakainen estimates that it is of little significance whose devices are used in the classroom. “It's absurd that pupils have so many devices but aren't allowed to use them.”

The key objective is to learn, she reminds.

Yet, young people continue to struggle with basic information technology skills. “Schools currently do little to promote the acquisition of these skills. The skills are acquired while using [devices] for leisure in the free time. As a result, many application skills remain poor,” Kaarakainen says.

The study found, for example, that young people have room for improvement in their online search and data security skills.

Overall, girls fared worse in the tests than boys, and the skills gap only widened in upper secondary education.