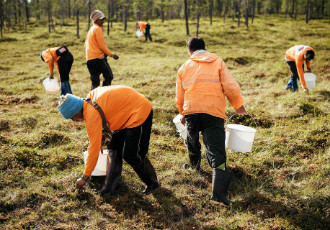 Representatives of the berry industry and the Ministry of Employment and the Economy have signed a letter of intent concerning the status of foreign berry pickers in Finland.

The berry companies have pledged to step up their efforts to promote the adaptation of the foreign employees to the local working conditions. Last year, for example, a number of berry pickers reported net earnings of no more than 20 euros a day for their efforts in Finland.

The letter of intent was unveiled in Oulu on Tuesday during a news conference held at the Employment and Economic Development Office (TE Office) of North Ostrobothnia. The TE Office is also responsible for commenting on issues concerning the picking of wild berries.

Under the letter of intent, questions concerning the rights and responsibilities of the recruiting company, co-ordinator and berry pickers – as well as the legal relationship to each other – will be addressed during the orientation period.

The letter of intent is a result of a study carried out at the Ministry of Employment and the Economy last year, in which rapporteur Markku Wallin examined the working conditions of foreign berry pickers in Finland.

“The goal of the agreement is to strengthen the position and earning possibilities of berry pickers and the people responsible for the associated tasks as well as to harmonise the operating methods of the recruiting companies,” says Olli Sorainen, a government counsellor at the Ministry of Employment and the Economy.

The Finnish League for Human Rights (FLHR) has demanded that a work permit scheme similar to that in Sweden be introduced in order to foster the rights of foreign berry pickers. Today, most of the berry pickers who arrive in Sweden have obtained a work permit and are therefore guaranteed monthly gross earnings of 2,000 euros.

“The letter of intent doesn't comment on the possibility of a employment relationship, which would require legislative changes,” points out Sorainen.

Most of the roughly 3,000 berry pickers who arrive annually in Finland are from Thailand. As they enter the country on a tourist visa, they lack the rights and legal protection afforded to those in an employment relationship.