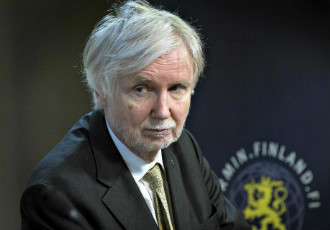 Erkki Tuomioja (SDP), the Minister for Foreign Affairs, has expressed his surprise at the reaction of Russia to news that Noptel, an Oulu-based manufacturer of optoelectronic products, will deliver laser range-finders to Ukraine.

Tuomioja on Tuesday revealed that neither he nor the Ministry for Foreign Affairs have been contacted formally by Russia regarding the issue, stressing that his knowledge of it is thus limited to media reports.

Russia has according to Tuomioja never before interfered in the sales of defence equipment by Finland. “This is an indication of how sensitive an issue Ukraine is to Russia. We're by no means supplying weapons to Ukraine,” he stated.

“We've received no contact from Russia. And Finland has no reason to do anything about the issue.”

Tuomioja underlined that the export licence procedures of Finland are transparent and therefore available for anyone, be it in Finland and abroad, to scrutinise.

He also denied allegations that the sale is a form of hybrid warfare. “I'd also ask everyone to cool off: not all that is commented on in today's world is warfare and should be referred to with warfare terminology.”

In addition, Tuomioja downplayed the magnitude of the issue and rejected claims that it has kindled a diplomatic crisis between Finland and Russia. “A question that is much more significant is how artillery has trickled into the hands of Ukrainian separatists,” he said.

Helsingin Sanomat on Monday reported that the Russian Ministry of Foreign Affairs has criticised Finland for sanctioning the sale of laser range-finders to Ukraine. “We were greatly surprised to learn about the decision of the Government of Finland to allow Noptel to deliver one thousand LRF-200 laser range-finders to Kiev,” reads a comment published on the website of the Russian Ministry of Foreign Affairs.

The devices, the ministry reminded, can be installed on firearms. “Such a move from Finland's behalf will not be conducive to the interests of peace and stability in Ukraine.”

Tuomioja reminded that the procedure was in compliance with standards governing the sales of defence equipment. “This isn't a question of weapon exports. The products can't be used as weapons, although they can naturally be part of a weapon system.”

The Government, he added, allowed Noptel to sell of 120 laser range-finders to Kiev as recently as in October, at the time prompting no response from Russia.

Russia also alleged that Finland has infringed on international agreements restricting the exports of weapons. The deliveries can according to the country be interpreted in Kiev as “direct support” for Ukrainian parties endorsing the war. “The decision of the Government of Finland runs against assurances by the leadership of the country of its allegiance to the peace process in Ukraine,” the comment reads.