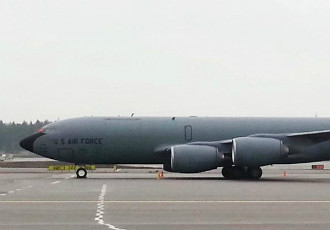 An aerial re-fuelling aircraft of the United States Air Force was sighted passing through Helsinki Airport on Monday. The aircraft has since continued its journey.

Previously, Boeing KC-135 Stratotanker aircraft have been sighted in Finland during aerial re-fuelling exercises. At present, however, no exercises in which Finnish pilots train alongside American military aircraft are under-way, a spokesperson at the Finnish Air Forces told Helsingin Sanomat.

The aircraft was thus in transit through Helsinki Airport while en route to its final destination. Juurikka also revealed that she has yet to be notified about the destination and the country of departure of the aircraft.

Spokespersons at Finavia, the operator of Helsinki Airport, declined to comment on the matter on Monday.

Naturally, foreign military aircraft are prohibited from landing in or entering the airspace of Finland without the requisite clearance. “Foreign state aircraft require a clearance to enter Finnish airspace. The clearance must be requested from the Defence Command a minimum of six days before the planned arrival in Finland,” said Juurikka.