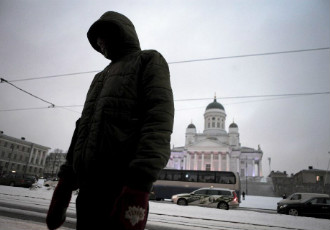 Amnesty International has reiterated its concerns about the treatment of asylum seekers in Finland.

The global human rights watchdog points out in its annual report that most of the 1,500 asylum seekers and other foreigners detained in Finland in 2013 were placed in police detention facilities due to the lack of appropriate detention centres.

“The detention of children is prohibited by law, and detention is a very traumatic experience for children. When you have adults in poor condition facing deportation in one place, that's not a place for children under any circumstances,” states Frank Johansson, the director of the Finnish section of Amnesty International.

The Finnish Parliament is set to revise the legislation governing the treatment of detained foreigners, but the proposed revisions would not prohibit the placement of over 15-year-old children arriving in Finland alone in detention, according to Johansson.

Foreigners are primarily detained after their asylum application has been rejected and police suspect that they may disappear before they are deported.

Jorma Kuuluvainen, the head of reception affairs at the Finnish Immigration Service (Migri), argues that the opening of a new reception centre in Joutseno has addressed issues identified by Amnesty. “We're under the impression that there hasn't been much need for police detention facilities,” he highlights.

Other human rights issues in Finland are associated with violence against women and laws affecting transgender people.

Johansson says that the extent of violence experienced by women in Finland is alarming, pointing out that more than 47 per cent of over 15-year-old women in the country have experienced violence, according to a Europe-wide survey.

Amnesty International also reprimands Finland for its insufficient network of family shelters and the poor availability of low-threshold services.

The Finnish Government recently failed to agree on a proposal to abolish the forced sterilisation of people who have undergone a gender re-assignment surgery and to allow them to remain married after the operation. “That would've been a step forward,” bemoans Johansson.