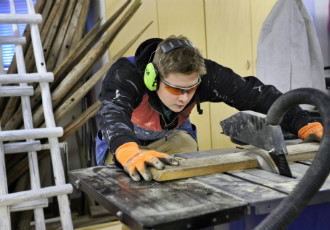 “A generational shift is taking place on an attitudinal level,” views Joonas Mikkilä, an organisation manager at the Federation of Finnish Enterprises.

Young people, he believes, consider self-employment an attractive career option because their attitudes toward employment are different from those of their parents: for them, work is not simply a means of livelihood. “The self-employed work more hours per week, but they feel that their work is more meaningful and important than wage earners.”

Self-employment has yet to increase among young people in a statistically significant manner, however. The self-employed are on an average older than wage earners, fewer than one-tenth of them being under 30 and fewer than one-fifth under 35 years old.

Toivo Utso, a chief business advisor at Enterprise Helsinki, reveals similarly that young people increasingly attend seminars and info events on self-employment. “It's obvious that schools invest more in self-employment and young people are more interested in it,” he says.

In fact, several young people set up their own business already before graduation.

In addition, many of them are concerned that a young business-owner may not appear credible in the eyes of partners and customers. Age has occasionally also proven an obstacle to finding suitable premises for their business.

Although the uncertain employment situation has certainly encouraged young people to consider self-employment, it is not the only factor contributing to the phenomenon, Mikkilä believes.

“People have prepared for the event that employment is not permanent also in other ways. For many, self-employment is temporary or a secondary occupation. I believe an entrepreneurial way of working will become more common,” he predicts.