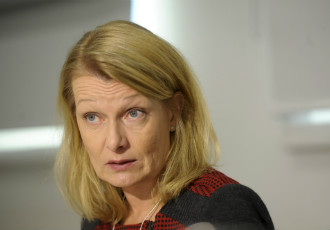 Lenita Toivakka (NCP), the Minister for European Affairs and Foreign Trade, has urged Finland to ensure it remains an attractive destination for Russian visitors and immigrants.

Toivakka “as a business owner from Mikkeli” is concerned about a recent survey by Helsingin Sanomat, according to which as many as 40 per cent of Finns would stem the flow of Russian immigrants into Finland.

It is vital, she emphasised on Tuesday, to influence the attitudes of Finns through public debate and to bolster their language skills. The commerce sector, in turn, would benefit from the alignment of opening hours with the needs of foreign visitors.

“There are no magic tricks,” the former K store proprietor said.

“After all, Finland has invested in making visas more readily available.”

The Russian rouble has weakened throughout the year in the face of economic problems in Russia and the crisis in Ukraine. Although the currency strengthened moderately amid Tuesday's sluggish trading, to 69.29 per euro and to 53.39 per US dollar, it has weakened by as much as 40 per cent against the US dollar over the past 12 months.

The purchasing power of Russian visitors in Finland has deteriorated along with the slumping rouble. “Visa numbers haven't collapsed entirely. The problem is that [Russian visitors] have less money at their disposal,” Toivakka said.

Toivakka also expressed her hopes that a resolution to the crisis in Ukraine is found as soon as possible.

Finland, she reminded, must have the foresight to look beyond the lingering economic uncertainty. “We need employment-based immigrants both from Russia and elsewhere,” she emphasised, reminding that the increase in Russian visitors has promoted prosperity in Eastern Finland in recent years.

According to the Minister for European Affairs and Foreign Trade, it is particularly vital to distinguish between the actions of the Kremlin and everyday interaction, although only to a certain extent.

Paula Lehtomäki (Centre), the chairperson of the Finland-Russia Society (SVS), has in recent weeks come under criticism from the National Coalition for her comments on the sanctions policy followed by Finland and the European Union.

The sanctions were adopted in response to the annexation of Crimea by Russia and the apparent reluctance of the country to seek a peaceful resolution to the conflict in eastern Ukraine.

“The criticism levelled at Lehtomäki is not a result of her actions as the chairperson of the society,” highlighted Toivakka.

The Ministry for Foreign Affairs collaborates regularly with SVS.