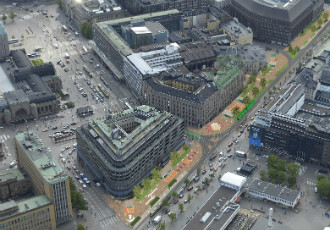 Green councillors on the Helsinki City Council have called for a trial to convert downtown Helsinki into a pedestrian zone, arguing on Monday that the conversion would improve operational preconditions for brick-and-mortar shops.

“It has been shown that pedestrian zones improve safety, convenience and operational preconditions for businesses,” argued Emma Kari, the chairperson of the council group.

Green councillors have also encouraged the City Council to experiment to rejuvenate downtown Helsinki. “The city's culture of planning is that everything must be tip-top,” described Elina Moisio (Greens), a member on the Helsinki City Planning Committee.

To her disappointment, the committee last May turned down a proposal to designate the eastern end of Mannerheimintie for pedestrian use. The committee is currently waiting for the City Planning Department to draw up a more detailed pedestrian plan for downtown Helsinki.

Moisio stresses that the effects of the proposed trial should be examined as exhaustively as possible from, for example, the perspective of business owners – not solely from that of smooth flow of road traffic.

The proposal by the Green League has been received with mixed reactions from Helsinki City Markkinointi (HCM), a co-operative body promoting the development of the city centre, as well as local property and business owners.

Despite being cautiously enthusiastic about the proposal, Riitta Lassander, the executive director at HCM, reminds that shutting down road traffic entirely could prove problematic specifically for small business owners. “They have no access to service tunnels but receive deliveries directly to their front door,” she points out.

She proposes that the city summon all stakeholders to a meeting to mull over a variety of possible approaches to the trial.

Lassander is also concerned that congestion in downtown Helsinki could increase if the Esplanadi park or the eastern end of Mannerheimintie is designated for pedestrian use as suggested by Kari. She estimates that the trial should last at least a year to allow the examination of its effects on all selling seasons.

Moisio, in turn, would be prepared to launch the trial “as soon as the snow melts in the spring”.