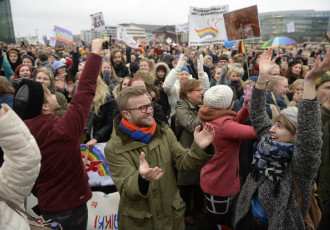 The Finnish Parliament today voted 105—92 in favour of a citizens' initiative to extend marriage rights to same-sex couples. Two Members of the Parliament were absent from the vote.

The decision will be presented to the Grand Committee of the Parliament for consideration, probably as early as next week, and then again to the Parliament for final approval. If all the necessary legislative changes are implemented before the end of 2015, the first same-sex couple could marry in Finland at the earliest on 1 March 2017.

The result of the vote was a triumph especially for the members of the Legal Affairs Committee who ensured that the issue was brought before the Parliament for a vote: Jani Toivola (Greens), Mikael Jungner (SDP), Suna Kymäläinen (SDP), Johanna Ojala-Niemelä (SDP), Aino-Kaisa Pekonen (Left Alliance), Jaana Pelkonen (NCP), Kristiina Salonen (SDP) and Stefan Wallin (SFP).

Over 160,000 signatories expressed their support for the citizens' initiative for equal marriage rights last winter.