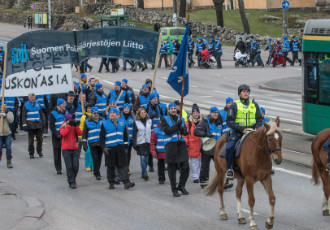 Roughly one thousand police officers from all over the country gathered in downtown Helsinki on Wednesday to participate in a protest against dwindling police resources.

“Criminal investigations have been reduced to registration. […] A big share of offences is not investigated simply because there's no time for real police work,” stated Jonne Rinne from the Finnish Police Federation (SPJL).

SPJL has estimated that the number of police officers in Finland will decrease below 7,000 in the near future due to the number of officers nearing retirement exceeding that of new recruits. “We're in a situation where internal security is in danger,” cautioned Rinne.

Currently, there are roughly 7,500 police officers in Finland, proportionally fewer than in any other European country.

“The patrols out in the field have shrunk notably after every administrative reform, and at least some constable posts have been left unfilled after retirement,” Sakari Ollila, a chief inspector at the Kuusamo Police Station, said after the demonstration.